When I chose to visit to Portugal for a 7-week stay, it was thinking I’d be in for a relatively dry season. Alas, Porto was as wet as Vancouver often is in the winter, and Vancouver’s in a rainforest. Thanks, Climate Change!

Part of “go the warmer/drier” motivation was the result of something you don’t think about as a traveller. I had a $250 Taiga all-weather coat stolen from me 5 days  after I purchased it, from the Reykjavik Airport. Not good. Iceland: Where Thieves Dare. (Probably a foreigner who went CRAP, IT’S WINTER HERE, when we got off the plane on the tarmac at 5am, though.)

I arrived in London coatless on October 6 and was lucky to be staying with two gay men, because if anyone’s gonna find you a damn coat, it’s your gay male friends.

Peter assured me that London had amazing delivery service and it would arrive the next day. Sadly, he was proven wrong when it failed to arrive. I only had two more days in London, so I was getting antsy already. Peter railed against the shipping gods, who assured its delivery would happen. Again, it didn’t come. And again.

Bye, Steff! The Coat Will Come!

So I left to Croatia still not owning a coat. Well, actually, I owned two coats. I owned $550 of coats. I just had none with me. Lucky for me, Zagreb would enjoy 15 days straight of downpours. Awesome when you don’t have a coat. Really!

Getting ahead of myself though. The day after my arrival, my friend emailed to say the coat had arrived. HUZZAH! He would send it to me.

I would be in Zagreb, a major European capital, not some Podunk town, for 22 days. Easy enough to sort out, right? The coat remained in the original store packaging, with bill of lading attached, and clear directions of where to deliver it. In fact, I arranged with a restaurant to receive the coat on my behalf because I knew I wouldn’t be around a lot. Smart, right? They were opened from 9am to 11pm, totally delivery hours.

So a week later, still no coat. My friend Bill follows up with Parcelforce and they tell him he must wait 10 more business days before it can be declared Not Arrived.

Because I had nothing better to do when travelling the world and all that, I returned to the restaurant four times (despite changing lodgings to be a fair hike away from it not long after the first failure to arrive) and after three weeks, still no coat.

Oh, Who Needs a Coat in November Anyway?

This takes us to November. A stellar month to be without a coat in most places, but luckily I found some cheap made-in-China thing in a Zagreb public market. I’d so far spent over $550 on winter coats I’d never worn yet, and I was NOT splurging on a third. $20 you say? You bet! I’m still wearing that today, but I digress.

My friend investigated no fewer than 3 or 4 times in November as to where the hell my coat was. He followed up repeatedly with their claims department. No coat, no refund, nothing. No help, even. No care.

On December 2, (more than 7 weeks after being “sent” to Croatia) he received a letter stating “We have completed our inquiries and can confirm that your parcel is currently in the process of being returned to the sending address.”

For Christmas, Steff Gets NOTHING

By Boxing Day, December 26, 2015, we had still received no word about where the hell my coat was. I got on the Twitter and railed against the Bad Parcel Gods That Be and found out that my coat was apparently sitting in some warehouse in London. I guess they expected that my coat was equipped with telepathic wiring that would alert us to its presence IN THE VERY SAME CITY. BUT NO! Well… okay. That’s a 30-minute cab-ride away, right?

It’s now January 8. Do you think my friend Bill has received the coat in London? 13 days later, and no.

Of course not. He was supposed to receive it Tuesday, the 5, but they called to say it was impossible and it would be there on the 6. But on the 6 and 7, no phone calls came, nor did any packages. No phone calls came today, either, the 8, but Bill contacted them and the claim now is that it’s in COVENTRY – a whopping 170 kilometres from Bill.

But here’s the thing: When we were told where it was on the 29, it was only 11 kilometres from Bill in London.

IT IS NOW FURTHER AWAY FROM US.

I cannot conceive that a company less professional, less efficient, or less intelligent than Parcelforce exists anywhere on planet Earth.

I just can’t imagine it.

So here I am, once again sitting behind glass as rain falls outside, wishing I had a raincoat like the $250 one that this friggin’ incompetent bunch of assclowns have had in their possession for exactly 90 days now.

Soon winter will be over and I’ll have no use for this coat.

Lesson in All This? Don’t Use ParcelForce!

So here’s a cautionary tale for you as a nomad: Receiving things by courier is hard. You’re always on the move, and when you’re not, you’re seldom around to receive the package anyhow.

And for the rest of you non-nomads, do not ever use Parcelforce. You will not receive your package in timely fashion. They do not guarantee delivery. They do not offer full insurance. They do not expedite matters when they have failed to perform to expected standards. They do not care that you are unhappy. They do not worry about your anger being unleashed in public forum. They do not want to resolve their commitments.

You can do better. Call DHL or UPS or FedEx but do not call Parcelforce. I think their name is actually with a typo. I think they’re really PARCELFARCE, because god knows this has been one.

Will I receive my coat before I leave Madrid? That gives them 23 days. Will I have a decent coat for the Azores Islands? DARE I DREAM OF THIS?

So it’s nine days later, January 18 (this debacle began October 9, 101 days ago) and Bill finally received a Parcelfarce delivery! AND THE ANGELS SANG HALLELUJAH AND THE CLOUDS PARTED AND THE SUNLIGHT OF GOD’S GRACE SHONE DOWN.

Except it wasn’t my coat. It was some stranger’s car seat. Not a baby seat for a car, an actual car seat. Think of it. Somewhere sits a lonely Renault or Skoda or Ford or something, missing a seat. And it’s in Bill’s house.

SEE BELOW. Look at the box. Does that box not look like it hit every step on the way down the stairs? It looks like it’s been to Hong Kong, Haiti, and the finest ghettos in the world, a crack den for good measure, and now it’s at Bill’s house. 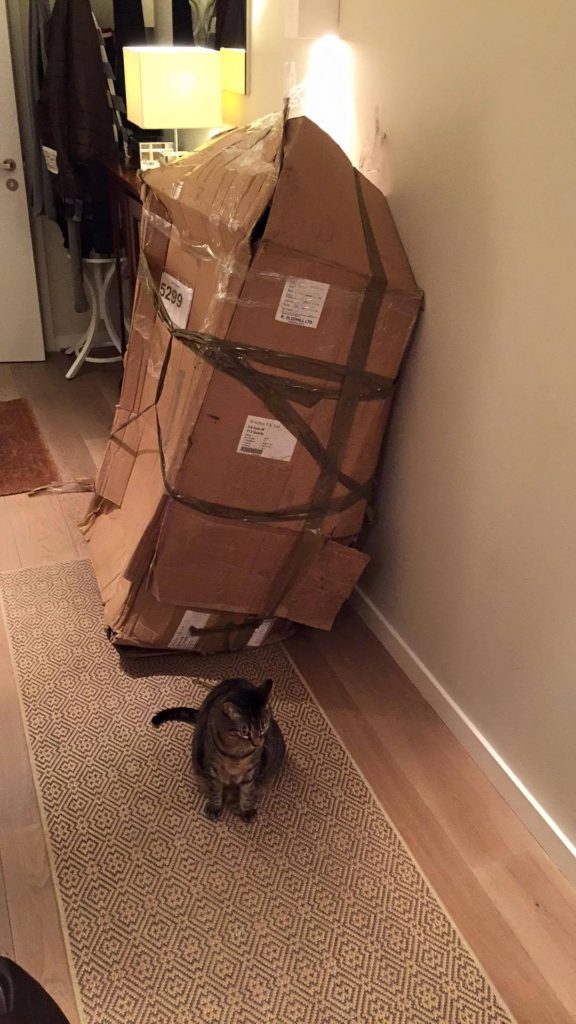 ParcelForce CARES. Obviously. See? Delivered with care and attention. A car seat. Not a coat.

And it’s taped in a way that really says WE CARE, WE’LL GET IT RIGHT, isn’t it? Even the cat is pissed off about it!

Makes you wonder what my jacket looks like around now, huh? I’ll probably get it with the decaying scalp of some baby attached and a crack pipe in the pocket.

Guys, I’m losing hope. If I would even just be refunded the 125 UK pounds I paid for the coat, I’d walk away and shut the hell up, but they INSIST they have my coat and that I do not deserve the refund on the insurance we paid for.

Well, if this car seat doesn’t back their argument up, I don’t see how anything could, eh?

Thanks, Parcelfarce. You’re better than an episode of Fawlty Towers for laughs on incompetence, except John Cleese never bilked me of 125 UK pounds, now, did he?

They called Bill for a DESCRIPTION of the package. I can’t imagine “rectangular cardboard box” is an overwhelmingly helpful descriptor.

delivery insanity nomad Parcelfarce Parcelforce receiving shipments shipping steff's coat travel
PARCELFARCE: My Epic Delivery Failure with Parcelforce2016-01-182016-08-18//www.fullnomad.com/wp-content/uploads/2016/04/logo2.pngFullNomadhttps://fullnomad.com/wp-content/uploads/2016/01/failbetter-960x960.jpg200px200px
About
Steffani Cameron
In 2015, I sold everything to travel for five years. I'm living out of a duffle bag and works wherever I can get some Wifi. A trained journalist and avid photographer, I'm passionate about culture and what makes us tick. Click below to contact me for projects and opportunities.
Showing 5 comments 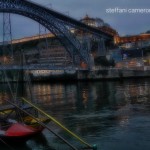 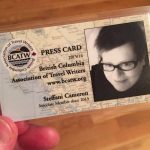 So You Wanna Be A Digital Nomad?Nomad Needs, Spain