When travelling, there are moments, snapshots of life, fragments in time, that say so much about who we are and how similarly or differently we live. One thing I’m always cognizant of is entitlement; who has it, who doesn’t.

Housecleaners have given me much to consider in my year since I left Canada. I’d begun employing cleaners myself in the three years before I began my travels, simply because I realized I couldn’t do everything. I needed to multitask and live more effectively and efficiently. So, I farmed out my cleaning.

My first cleaner was great but then suddenly she left town. I never got my key back, never got a satisfactory answer about why this new mysterious diversion transpired. Lesson learned: People are weird.

The Weird Get Weirder

The next cleaner I got was even odder. Showed up and practiced what I can only describe as “instant familiarity.” The kind of person who thinks you’re friends from the moment they meet you. She had a bad back and hobbled unevenly, straining with every move. Watching her was baffling because I had hired help because cleaning hurt my back too much. Paying a cleaner was cheaper than lining up a couple of massages. I hadn’t hired help so I could feel guilty watching them work! I also didn’t have liability insurance in case she got injured, which, from the looks of things was an inevitability.

By the end of that first (and only) session with me, she started saying things like “I should do what you do. You know, write. My friends tell me I’m a good writer. They say I should write. How do I start making money from writing like you do?”

There is no way to inspire angst and ire in a writer faster than saying, “Meh, how hard can it be? I’m gonna do what you do. I know words.”

In the writer’s mind, this happens: 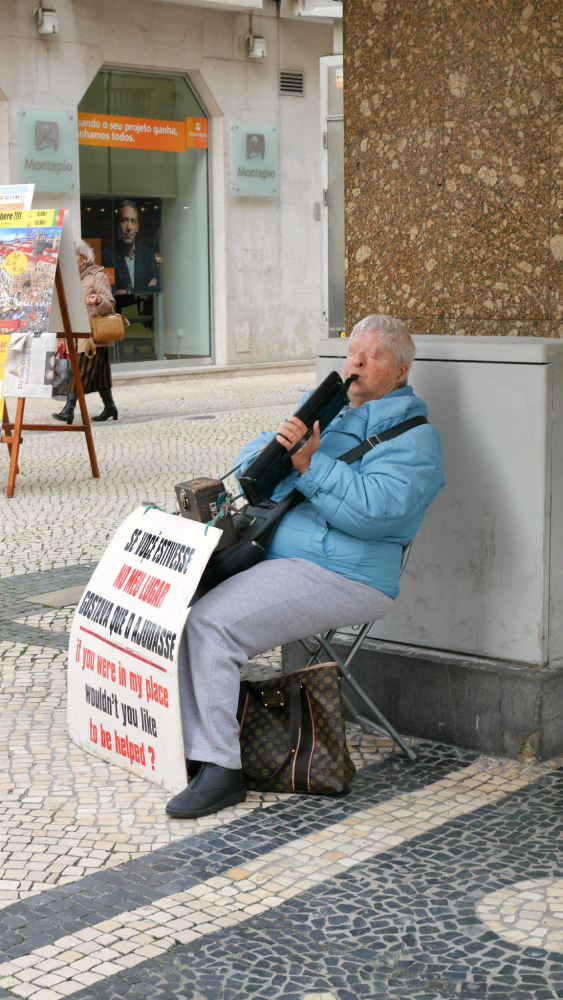 This woman has no eyes. She doesn’t even have eye sockets. How do you think she feels about “entitlement” complexes when she’s out there playing a recorder for money? I shot this in Lisbon and she stayed in my mind for a long, long time.

Because Writing Is Easy

This is when it helps to know things like “The average writer earns $13,000. For every millionaire, there’s a few thousand writers taking home a couple hundred bucks a year while they serve coffee in a diner.”

That doesn’t deter these “I should do” people, because they know ME or some other writer who sits at home in drawstring pajama pants somehow eking out an existence.

Obviously, that was her last cleaning session. Afterwards I found myself polishing this, dusting that, and wishing she’d spent less time uttering fanciful fantasies and more time doing her actual job.

That sounds like an arrogant, cocky thing to say, but I don’t care what the job was, every job I’ve ever had, I’ve done it to the best of my ability. If you’re hired, do your job. Doesn’t matter what it is. Have pride. Do it. From retail to writing, I always do my best. It matters, not just to other people, but to the voice inside your head. If you can say “Did I do my best today?” and answer yes, no one can take that from you.

Lesson: Employees With Entitlement Are the Worst

My next cleaning lady I stuck with for the next 18 months until I left Canada. Not because she was wonderful, but because I learned how hard it was to get a tolerable, affordable cleaner, so I settled.

Like most people, The Next Last Cleaner dismissed my “I’m working toward traveling the world” claims as wishful thinking. Instead of listening to stories about my work ethic or planning, she would talk about her drinking and the men in her life. Joy. Yes, if you’re working for someone, you too should talk about drinking and men. It makes you instantly trusted. Trust me.

She told tall stories, like “if there’s time, I’ll do _____ to fill my time every week,” but I knew she constantly left early. I’m a writer, I observe things. Like when I would come home after 1 hour and 50 minutes, and see the person I paid for 2 hours has already long since driven away.

Alas, I didn’t have the emotional capacity to create more conflict in my life. I know “entitled” people and I don’t have time for that drama. These are the people who think they’re better than their station in life, in old-fashioned speak, or those who feel they “deserve” more than where they’re at. 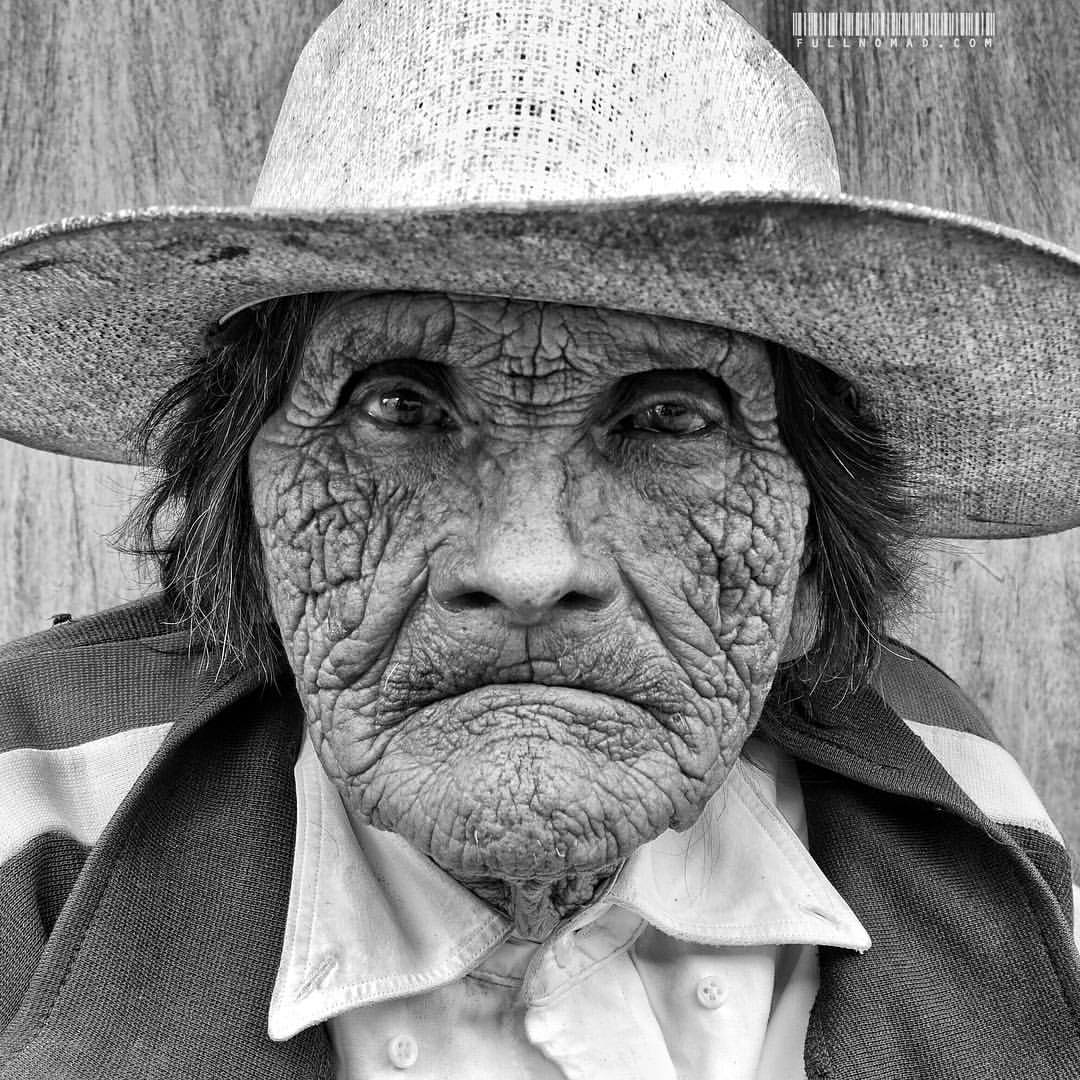 This man was begging for money in San Miguel de Allende, likely because he’s too old to work anymore. I guarantee you he’s never felt a day of entitlement in his life. He hopes for help, but he didn’t seem to feel he was entitled to it. I paid him for this picture.

Deserve? You Deserve It? Huh.

After all, I was that person for a long, long time. Yep. Entitled as hell. One day I called myself on all my private bullshit and I realized “deserve’s ain’t got nothin’ to do with it.” That line sounds better when you do it in a Clint Eastwood voice. Trust me.

Doesn’t matter what you think you deserve in life, friend. It matters what you earn.

Had I stayed in Canada, I would’ve fired that cleaner for dishonesty with leaving early. I paid for two hours, woman, and I’m not rich.

But hey, I was about to travel the world, so, you know, I got what I “deserve” and it’s her time for “deserves,” right?

Man, I can’t tell you how much my life changed when I lost that attitude and put in the work to earn every damned thing I had. It matters. It’s like wildfire, that attitude. Through your whole life it burns, catching everything, and soon, it spreads. Then there isn’t a part of your life that doesn’t benefit from the magic of the hustle of “earning it”.

And Then I Travelled

In contrast to my experiences with cleaners back home, there are those in the rest of the world.

Every cleaner I’ve had so far in Europe or Mexico goes above and beyond what I experienced back home in Canada. They wipe out the fridge, organize stuff, dust EVERYTHING. They’re neurotic. Whatever else is happening in their lives, this job is the one place they can make perfect, and it shows. Their pride is everything.

In fact, this whole entry began when I went into the cupboard under my sink to bag up the garbage this morning. I looked in the corner, and there was my plastic bag of plastic bags. You know how it is, you go shopping, get a bunch of bags, stuff ‘em one into the other, then shove it under the sink, right?

Well, yesterday the cleaner literally took out every old shopping bag, folded each up, and piled them up neatly, then wrapped the outer bag up to contain it all. Now that’s pride in your job. Even junky plastic bags were something she felt obligated to make perfect. I was so impressed, I laughed out loud.

That’s passion for workmanship. It’s dedication to detail. There’s no “deserves” about it, no short cut, no deceit. They have a job and, come hell or high water, they’re getting it done to the best of their ability.

It’s not just my old cleaner who had that “deserves” attitude. I find it rife in North American life. Entitlement is a disease and it’s everywhere.

When I was 30, I took a one-day course on entitlement. I’ll spare us both the titillating story of why I was obliged by law to take it.

But it didn’t change my life, broaden my mind, or wake me up. I “got it” a little bit, but it wasn’t until nearly a decade later that it really got through to me. I hate to admit it, but reading The Secret and The Power of Now were the light-switch in my life where all the “a-ha” moments came together. No, I’m not kidding. Sigh, I know, right?

Still, suddenly I decided my success or failure were on me, not on the world, and the world owed me jack.

Victoria, my big move to Victoria, that’s when it all changed. I read those books after I stopped expecting Vancouver to cater to me. The big city, I finally realized, would never get easier to hack and I wasn’t happy there anyhow. When I left, I said “I can do better than this, I can make myself successful.” Then I did everything I could to make that a reality. I stopped the excuses. No more did I believe I was “entitled” to my weekends or off-hours. I was legally entitled to them, sure, but taking them meant I chose to accept that which I had in life, as opposed to insisting I earn more, do better, aspire higher. 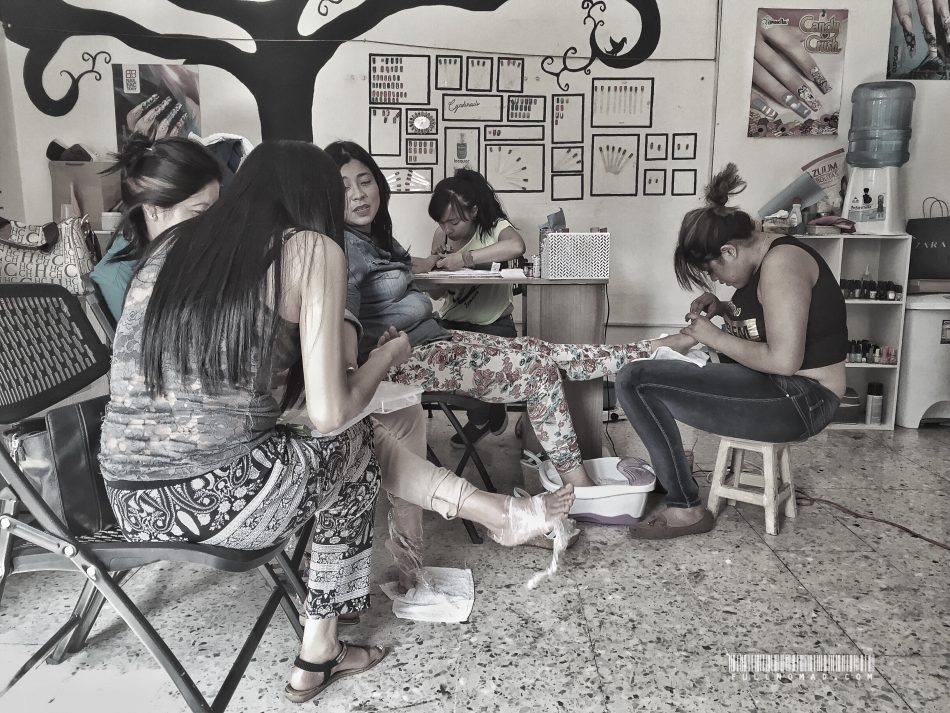 This is what entitlement looks like. I couldn’t understand a speck of the conversation in this Mexican salon but this woman clearly demanded all the employees in the place wait on her. Her husband kept falling asleep watching football and she would bark at him the moment he nodded off, despite her being otherwise engaged with the aestheticians. Note that she’s literally getting her fingernails done reaching over another woman. Don’t be her.

Yesterday someone asked me how I make freelancing work for me. Like I’m not still struggling with debt after an underemployed year. But hey.

Well, I said, it ain’t easy. I take every job I can, I pile it on top of my life, I lose sleep, I lose free time, and I work like a dog. Complicated, right? I work my ass off. That’s what. Then, I never phone it in. I never do bad work, and I remember every single client is a walking billboard: Do great work for them, and maybe someone else asks “Who’d you hire, man?”

I was paid to go back and fix that guy’s mistakes on a job we’ve been collaborating on. That’s the difference between someone who cares about getting it right, and someone who does the bare minimum because that’s all they care about. The latter shows; you’re not fooling anyone. Trust me, the client just doesn’t have energy to deal with you because they have more important duties. They’d rather pay someone like me to babysit the other person, because I’ve proven I care about the end result.

How To Not Be An Entitled Prat, By Steff

With the year winding to a close and so many people looking toward 2017 and what promises it might have, the challenges therein, and the improvements they dream of, here are some reminders:

Believe me, those attitudes will change your life in every way.*

*Doing these things is hard work and I don’t always stay mindful of them. When I am, everything keeps moving in positive directions. When I don’t do ’em, things don’t go well. HUH. Funny how that goes, eh? 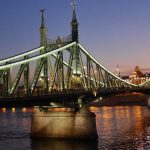 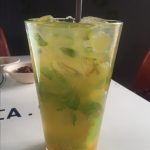 That Time I Got Day-Drunk in Merida, MexicoFood & Drink, Mexico