Notes From A Soupmaking Sunday in Sofia

It’s Thanksgiving weekend in Canada, but not in Bulgaria. Still, being gainfully employed in Canada, I get a paid statutory holiday. Yay for money for nothing.

(Insert Dire Straits playing in the background as our itinerant writer taps away. ‘Now that ain’t workin’, that’s the way you do it…’)

My Sunday is not that of a long weekend Sunday. I’m working and taking it easy. I drastically overdid it yesterday, walking over 10,000 steps for the first time in months, despite a terrible week of back pain and injury.

The culminating culprit was the unending construction here in Sofia; they are making some sort of plaza nearby, I gather, and also extending the Metro line considerably, so entire blocks are closed off with metal partitions. Strains of REM’s early “Can’t Get There From Here” played in my head as what should have taken a block or two became an over-one-kilometre detour peppered with a mojito-sidewalk-break and a very strange conversation with a very strange man named George, who appeared to be a Bulgarian by way of Paris with an indecipherably-thick accent and who spoke via blowing his words out with chipmunk-puffed cheeks, making his enunciation so baffling that I fear I retained a mere 20% of what was said, after which I toddled away with four phone numbers and an email hastily scribbled on a shop receipt. 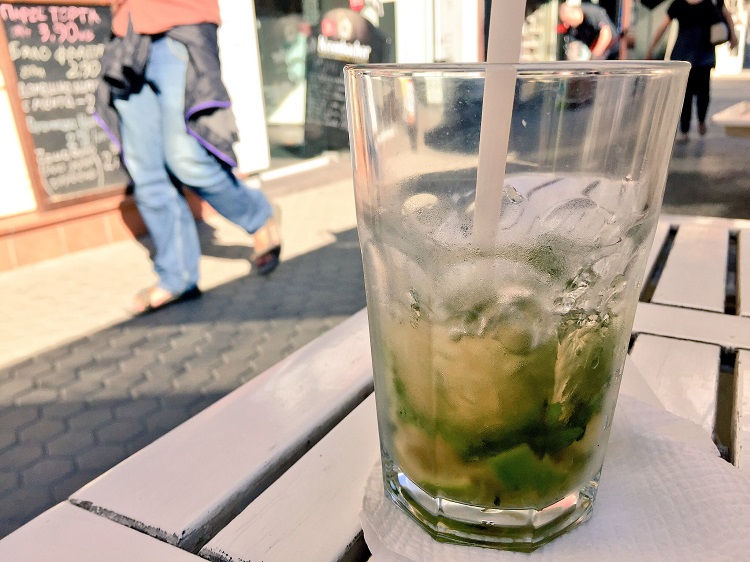 A surprisingly tasty mojito, which I felt compelled to have as I was weary and walking past the shopfront sign, advertising it for the equivalent of $4.60 Canadian, a good price here. Not pictured: George.

The Land of Wonky Walks

Here’s an interesting oddity about Sofia: They have the worst sidewalks I’ve ever seen in a capital city. Sure, I’ve seen some bad, bad sidewalks in my time, but they’re usually in smaller towns, akin to being a hodgepodge of connected walkways undertaken in some kind of oddly independent way – this guy builds this building, adds his bit of sidewalk, and oh, sure, it’s 5” higher than that one and a little slanted and cracked, but there you go, part of a patchwork sidewalk!

But, in Sofia, it’s like they had this idea to use pavers and make all these sidewalks throughout the city all at once. Hexagonal concrete pavers, usually. And I suspect, in the beginning, it must have looked quite funky and hip, but today it is alarming how badly they must have executed this because there are almost no two pavers side-by-side that are level, and many have badly cracked, especially in my neighbourhood. I suspect these were laid at least 20 years ago, and that, at the time, there wasn’t a steamroller at work anywhere in the city. They certainly didn’t use crushed fill to help level the surfaces under the pavers, and the result is that all of them have slowly cracked or unlevelled or loosened to become wobbly. It makes walking in this city a real adjustment for anyone with wonky knees or a bad back. 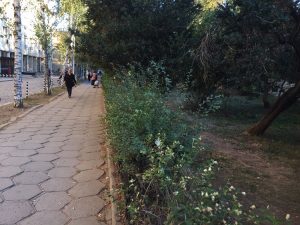 Not cracked on this block, but definitely not level!

And so it was this bad back that largely accounted for my strange route undertaken yesterday. I started off with a massage – easy enough, straight up from my home for about a kilometre, then left by a block. Then I had a fancy appetizer and a glass of wine at a culinary school, all for about $11. Then I bought ALL THE CHEESE at the fromagerie next door. My day’s haul resulted in the glorious discovery of baby buffalo mozzarella, Grana Padano, and what looks like a delicious Brie; between 150 & 250 grams of each all for the low, low price of $10 total — what a difference it makes when a transcontinental flight isn’t involved.

Cheese packed away, I embarked on my quest for ice packs, during which All The Detours led me to the chat with odd fellow George.

After, I finally found cold packs for my back at a pharmacy, had ribs at a trendy eatery, and ran errands for groceries in the final stretch. 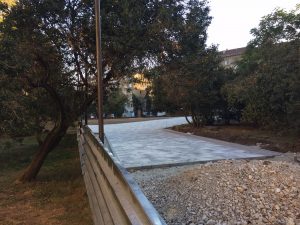 Look… they’re using both sand and crushed rocks as fill! This should look nice for a while, then, one hopes.

This is when I bought bread at my local bakery, which to me would be “that nummy butter-based white loaf” but is apparently a complicated four-word Bulgarian phrase in which one word sounds distinctly like “meow”. I struggled with the phrase and have already forgotten it, but before I left the shop, I used Google Translate to explain, “I have six more weeks here, and if we’re both lucky I will finally learn how to say this before I leave Bulgaria.” The maven of bread has historically been frosty, but after two weeks is finally warming up to me, and after reading Google Translate, she laughed quite hard. I smiled, said “blagodariya” — thanks! — and “priyaten den” — have a good day — as proof that I’m finally learning a thing or two about a thing or two.

Priyaten den has made things more complicated than easy, though, it seems, because the trouble with learning a tiny bit of a language is that people seem to think you know more, and they babble longer. Just nod and smile, is how that goes. Nod and smile, the nomad way. 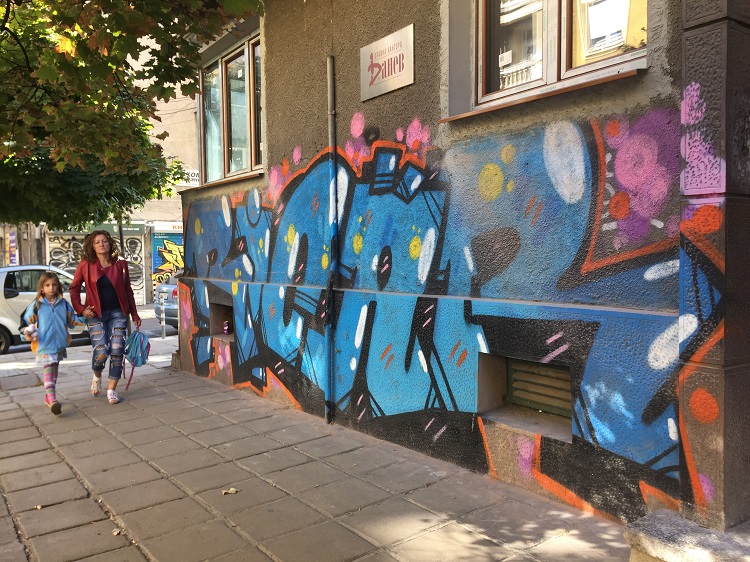 This is one of the typical urban semi-residential streets in Sofia, Bulgaria. Wonky sidewalk, a little graffiti, trees. But it’s all good. It’s a very liveable city.

Anyhow. Now it’s Sunday and I do have to work but I’m also reading and wearing fat pants and about to do something very, very exciting: Make soup.

Not just any soup, though. I’ll be capitalizing on the leeks that are everywhere right now — nearly two feet long of beautiful light-green stalks and just 75 cents for three. Then there’s the delicious leftover “meow” bread and the back-home-they’d-say-‘artisanal’-but-here-it’s-just-sourdough bread ends, which have grown stale and hard, that I’ve chopped into cubes.

Now, the thing is, I’m fat. And that’s okay for some, but for me it’s really affecting my quality of life. Maybe I’ll never be “thin,” but I can be fitter and a little slimmer, and I need to be, because I don’t want to suddenly die of heart disease or have my knees fail before I see so much more of this amazing world, and I’m 45 now, goddammit. 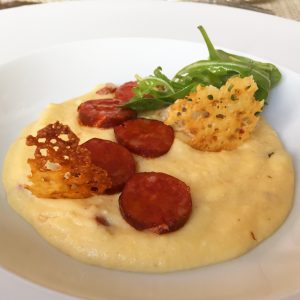 Part of the “better me” plan still includes eating delicious things, but this was a starter, not a main, and it’s made by Talents, a culinary school restaurant here, and cost me just about $5.40 CAD for this saffron polenta with chorizo and crispy shallots. Quite delicious.

So, it’s here in Sofia that the Better Me Plan is in gear. My recent back pains are only part of the ever-dawning reality of Something Needs To Change. Granted, going from often-sedentary to living on the fourth-floor of a walk-up where every home is 10-foot-plus ceilings therefore it’s 75 steps to get home after the wobbly-sidewalk-grief of Sofia means I’ve done the whole thing rather baptism-by-fire for my knees and back, and I’m definitely in the “too old for that shit” category now.

Hence a day off from the stairs, a soup-making day. But the fat-digression bit is all slave to explaining the dried bread and the soup. See, in North America we routinely thicken soups with a roux – fat and flour. Yum! But in Old World Europe, it’s very common to use stale bread in soups. Like the Portuguese peasant soup I fell in love with in Porto, sopa Alentejana, a simple garlic soup with a poached egg and bread that I have yet to recreate, but will soon.

Often the bread is simply cubed and dropped into the soup, where it soaks up the broth and makes it thicker while adding soft fluffy bready bites. After all, bread’s made with flour too, right? But today I’m doing the kind of cooking experiment I used to do when I had a home, but I’ve seldom done while living abroad. You see, I have a new tool in my travelling kitchen arsenal – an immersion blender! I’m not a fan of chunky soups when they’re vegetables I don’t really love, like broccoli or spinach, but they’re so healthy and I need more in my diet. I insist on these being pureed in soup form. And now I have a blender! 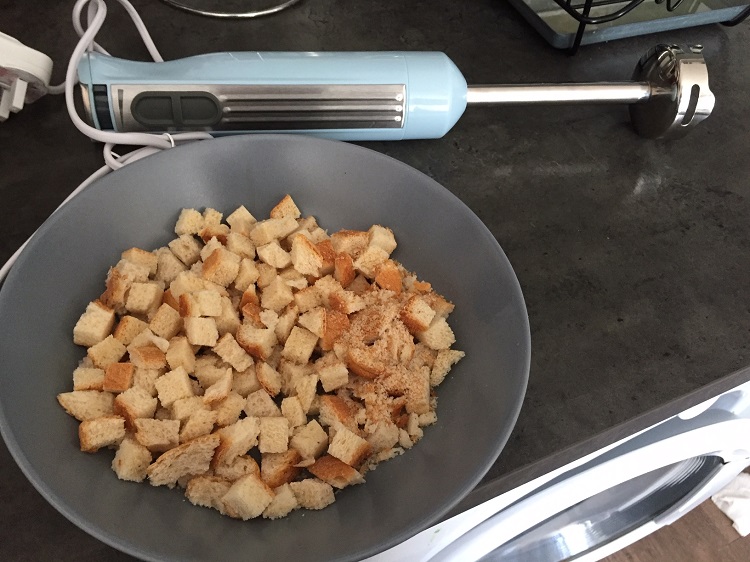 (You’ll forgive me for indulging myself, but in my head, as I typed “and now I have a blender,” I flashed to the Die Hard movie scene with the dead baddy Marco in the elevator with the words “and now I have a machine gun… ho, ho, ho” written in blood on his sweatshirt.)

So, the Better Me Bread-and-Broccoli Soup Experiment is under way.

The Weirdly Simple Life of Nomads

And this, friends, is why I need to slow down my travel after three years of this life. So I can carry a blender with me and make soup in nicer kitchens.

Even if it means taking the long way around and running into strange Parisian-Bulgarians named George who speak inexplicably about parliamentary processes and such.

People think that living abroad is so exciting and filled with derring-do, but, in reality, it’s days like yesterday – wrong paths taken, accidental discoveries of neat stores and little parks, strange conversations with men named George, shopkeepers trying to teach you new words, eating at restaurants you may never set foot in again, and finding the occasional comforts of home, like a cheese you miss, before calling it a day. Errands abroad tend to be the kind of ‘adventure’ many of us nomads enjoy more often than not.

And you know what? I like it that way.

Now. Time to make some soup. A very Happy Thanksgiving to my Canadian friends and family – who feel so very far away, but are never far from my thoughts. 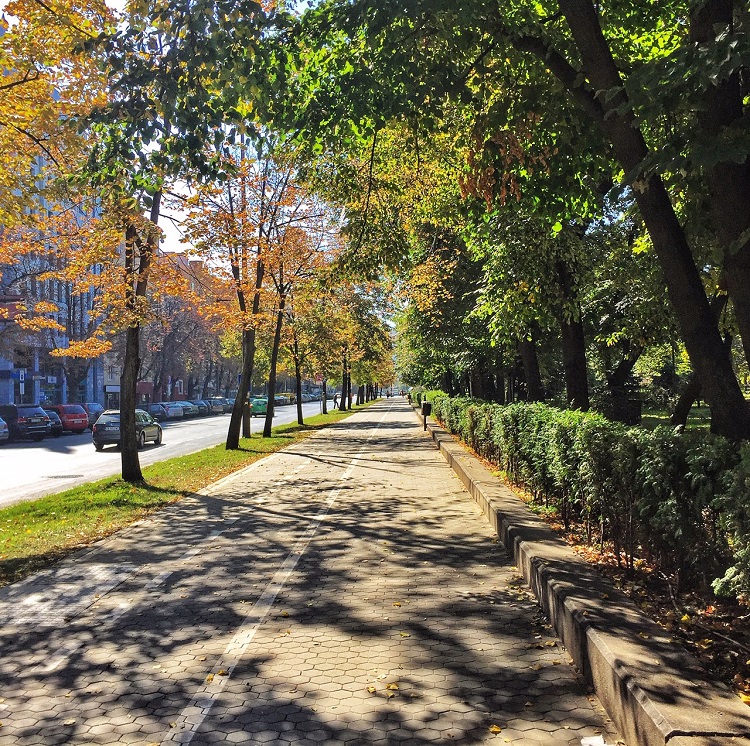 But… not all sidewalks are screwy! It seems they learned the error of their way at some point and this more-recent walkway-cum-bike path is a very lovely flat-ish sidewalk up past the cultural center here in Sofia, Bulgaria.

Notes From A Soupmaking Sunday in Sofia2018-10-072018-10-07//www.fullnomad.com/wp-content/uploads/2016/04/logo2.pngFullNomadhttps://fullnomad.com/wp-content/uploads/2018/10/IMG-7726.jpg200px200px
About
Steffani Cameron
I'm a journalist born and raised in Vancouver, Canada. Trapped in a life others kept selling as "the dream," I decided my dream was decidedly different. I sold all the stuff I'd worked so hard to acquire, and at the age of 42 I set off searching for something else—culture, food, adventure, far off lands. In short, I sought the whole world. 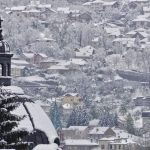 The World Behind Nomad EyesStories and Thoughts 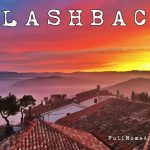