New Year Reflections from A Nomad in Sicily

It’s New Year’s Day and the firecrackers have fallen silent. For nearly 12 hours yesterday, it was an explosive experience here in Palermo, Sicily.

Some firecrackers were as loud as bombs, set off in front of my building. One explosive was so loud that my doors and windows rattled on the fourth floor of this concrete building. Nothing in my six months in Mexico comes even close to the pop-bang-pow aural experience of a Sicilian New Year.

The non-stop detonations derailed my plans to reflect and ponder my future. Instead, I watched British comedies, ate, and drank an excess of cheap wine.

But today the peace has returned. For now, anyhow. My mug’s coffee level is falling fast as clouds move quickly over the sky. Rains are coming. 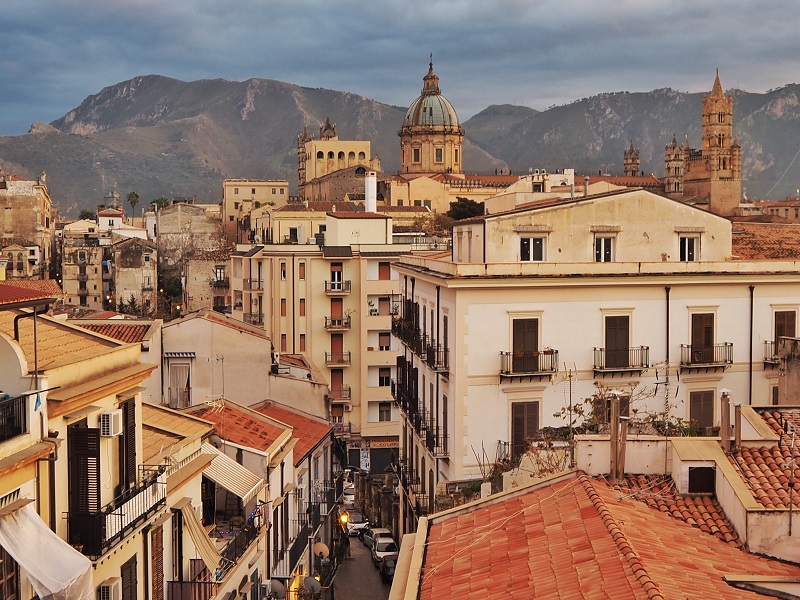 My view from my apartment in Palermo, Sicily.

I’ve been a bit bummed here in Palermo, since my choice of apartment has been a great big fail, making drastic impact on my ability to enjoy this city. From the knee-punishing stairs that leaves everyone wheezing to the bad furniture long past their best days and the old box-spring bed, I’m just happy I’m soon leaving without amassing further back injuries. The few days on which I’ve been adventurous, I’ve come home in agony, and have been trapped at home the next day for recovery. Each week, I’ve visited an osteopath, too, also leaving me out of commission the next day. The consequences of both of these meant I gave up on adventure and stuck close to home.

This experience, the latest of my underwhelming regional experiences since May of this year, when injuries first began in Serbia, figures prominently in my decisions to cut the nomad life short and move to Ottawa in August.

Ottawa isn’t an end to new experiences, though. I’ve never spent time in Ontario other than a few family visits in my youth. I’ve never seen the Northeastern US. I’ve never visited Quebec, except for a diner stop in Montreal at age eight, en route to Halifax by train, when I ordered pancakes for breakfast, was brought crepes, and whined to my mother that they’d forgotten to add baking powder.

So, Ottawa and Ontario will still be an adventure, but more grounded with a home to return to and nest in. Plus, I appreciate crepes in all their glory now. (I’m so growed up, minions, that I even love buckwheat galettes!)

But this Palermo apartment has been an enlightening fail in another way, too. 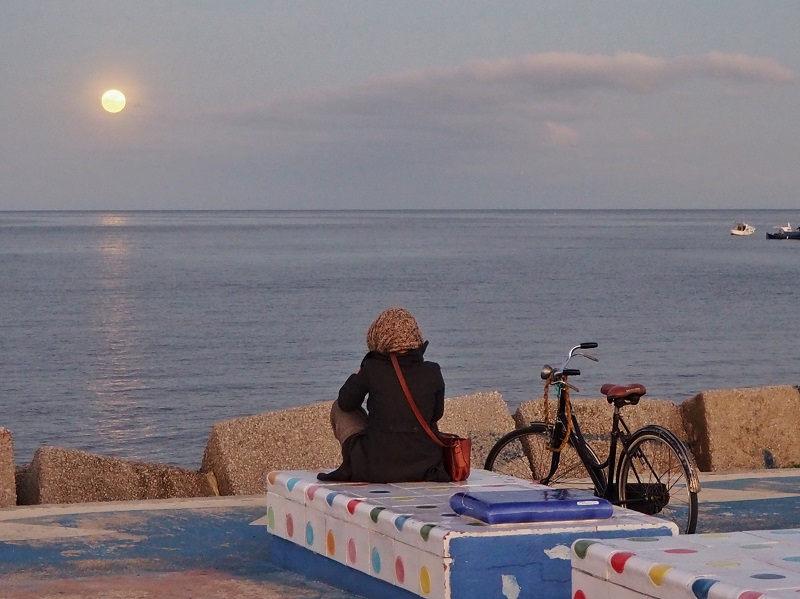 This was a day that crippled me. I walked about 13,000 steps or around 9 kilometres and got home in agony, but I saw beautiful things in Palermo, like the full moonrise over the Tyrrenhian Sea. This woman made me envious and dream of who I want to become again, that girl in a town with a home and a bike and a regular beautiful spot she goes to for clearing her mind and recharging her soul. Sometimes, routine is a magnificent thing.

I chose this penthouse apartment because it was filled with shelves of books, interesting knickknacks, and the assemblage of a life well-lived. I had a home much like this a decade ago. I called it the “eclectic professor” look – an array of interesting and eye-catching mementos and kitsch.

Around 2008/2009, I decided to declutter with a goal of reducing my belongings by 25%. A minimizing-nerd friend was thrilled and offered to help. With her guidance, we made it happen, and I found life with less clutter to be far more peaceful. Over the next five years, decluttering happened on the regular until I downsized completely for nomadding, leaving me with essentially nothing when I return home.

Coming here was kind of a nostalgic wink and a nod to that place of mine from memories past. I thought it’d be inspiring and restful. Nope. I’ll have much to say about what this place has done for me mentally and emotionally in regards to dreaming of my future, but I need to leave it behind before I can see it clearly.

Despite dreaming that it’d be wildly inspiring here, my best writing in this apartment has happened on the terrace, where there are just four chairs, an umbrella, and a table, with a great view (see city photo above). A lesson, that.

The living room gets none of me, not least because the spring-worn chairs have no support. Frankly, its art and clutter and books overwhelms me.

It’s cemented my realization that I’m returning to Canada with a blank canvas and can build the life I want, with only what I need. I won’t worry about not having much to fill my home. I’ll enjoy hunting new things, I’ll print and frame my photography. I’ll refinish furniture to fit my personality. But I’ll never be the eclectic professor again.

Further emphasizing these desires was a chat with a friend home for the holidays, who commiserated on my lament of clutter. She’s finding her folks’ hoarding to be “soul-sucking.” This is exactly how I feel, because, other than the sense of losing myself in this space, and in not a good way, I don’t know what I’m thinking or how I’m feeling. All I feel inside is noise. Not conducive to writing, I assure you.

The next home I rent, off Naples, is 180 degrees from this – no art, no clutter, just small splashes of colour. I suspect, somewhere in between these extremes lies my perfect home.

For now, I’m down to four more sleeps in this body-hating apartment that has cramped my Sicilian stay so much. I’m proud of myself for somehow weathering these obstacles, but also angry and frustrated that it’s at the expense of this Palmeritani experience. That’s just how it goes. 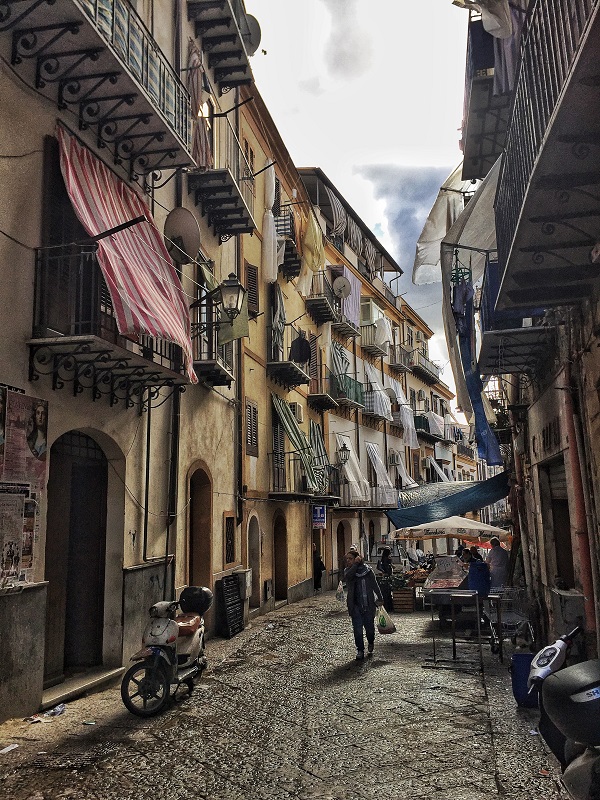 A woman returns home with groceries during intermittent rains on Mercato del Capo, Palermo, Sicily. This is my street and I’ve enjoyed the chaos and lifestyle, so at least I’m glad I’ve lived somewhere interesting.

When the Ride Stops Being Fun, Get Off

That, too, is why I’m ending the nomad experience. I’m tired of feeling like I’m failing to travel well, that I’m not seeing all the things, doing all the things, and these places are being wasted on me because I’m not able to enjoy them like one should. It brings me to the point of tears when I feel like I’m in the experience yet being robbed of its potential because I’m not up for it.

But I feel like I can change that with time off and focus. I know I can.

This time, I’ll know what I’m fighting for, why that workout matters so much, what the goal is. I cannot wait for that challenge, and a clean-slate home in a place where I’m around long enough to create routines and thrive at them.

So, yeah, I’m entering 2019 after a period of great frustration and disappointment, since I’ve really not done these glorious locations the justice they deserve – but I’m also entering 2019 proud that I’ve survived my obstacles and excited for what stands before me, the opportunities ahead. And I know stopping in 2019 doesn’t mean stopping forever. Now, I know I can go nomad again. 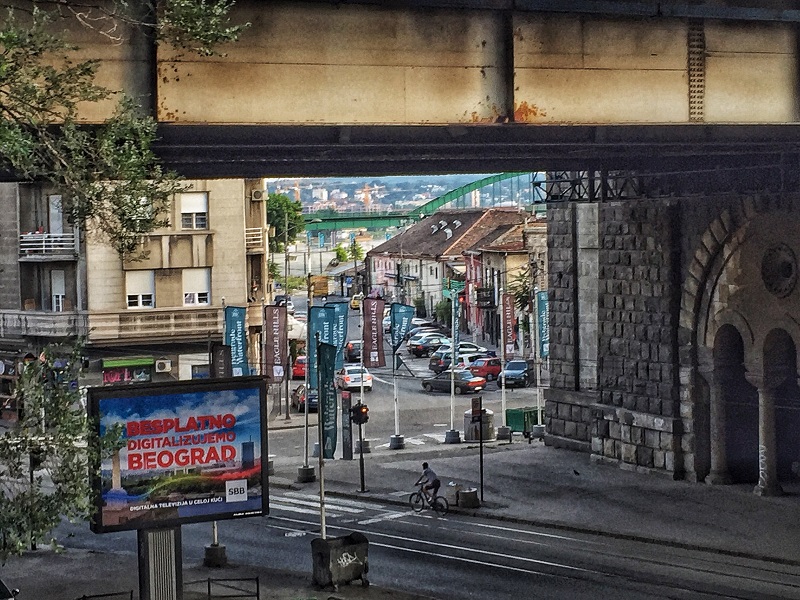 While my back injury happened for real in July, it all began here, in June — Belgrade, Serbia, where I lived on the fourth floor, but then had to climb four flights up to the bridge level to get anywhere in the city. Slowly, back pain increased over the next month, and then I visited Croatia, Hungary, and Poland before the back blowout in my first week in Romania.

This optimism I feel is glorious and has been both a long time coming and much-needed. Like many who leave their homelands for a while, it takes leaving to really appreciate what’s left behind. I understand Canada better. I see it more through the eyes of foreigners who respect and envy what we’ve created and the values we have in my young country. I understand our legacy in the world and why people long to visit Canada, or even move there. I know what it looks like when people’s eyes light up when they hear the name “Canada.” It’s made me more patriotic than ever.

But it’s also helped me understand better what we do wrong, what we need to change, and why we’re imperfect, too.

Last night, I chatted a bit with my friend Duane Storey. We both share the sentiment that nowhere is perfect. Duane went nomad before me, back in 2013, and was one of those people I watched for inspiration and guidance. In the years since, he’s had extended periods abroad as well as back in Canada (including Ottawa!), before deciding to move to Spain for at least a year, where he is now, filling his piehole with Rioja and jamon Iberico under a Spanish sun.

We chatted about how travel makes you both appreciate your home more but also understand its flaws better. Ultimately, for folks like us, there probably is no perfect place. It’s all about finding somewhere best suited to who we are at any point in our lives. The beauty of being a nomad is in realizing nowhere needs to be permanent, that no borders truly contain us. Change of self, of location, are entirely a matter of choice and determination. We understand that probably better than most people ever will.

I’ve certainly learned perfection of place doesn’t exist for me. Maybe one day, somewhere, some time, some place will feel like I’ve arrived home. And maybe one day that, too, will change. But, for now, like a true nomad, I believe home will literally be where I make it. This year, that will be somewhere I can easily navigate the whys and wherefores of life and bureaucracy, after nearly four years of struggling to accomplish even simple tasks while being abroad.

Sometimes, just making life easier is how we make it better. For me, that means returning to the motherland, filling a home with basics, and living in an English-speaking part of Canada. For now.

Ahh… those Sicilian firecrackers are resuming as the mercury plunges. Those coming rains have drawn closer. And so it goes, more time slips away. The new year is 16 hours old already. Just 110 days remain until I step off a plane in Toronto, Canada, a short layover en route to Vancouver, starting a new chapter as the prodigal Canadian returns with a fresh appreciation for all things maple and northern.

Happy New Year, everyone. Clean slate, big possibilities. Where will it take you? 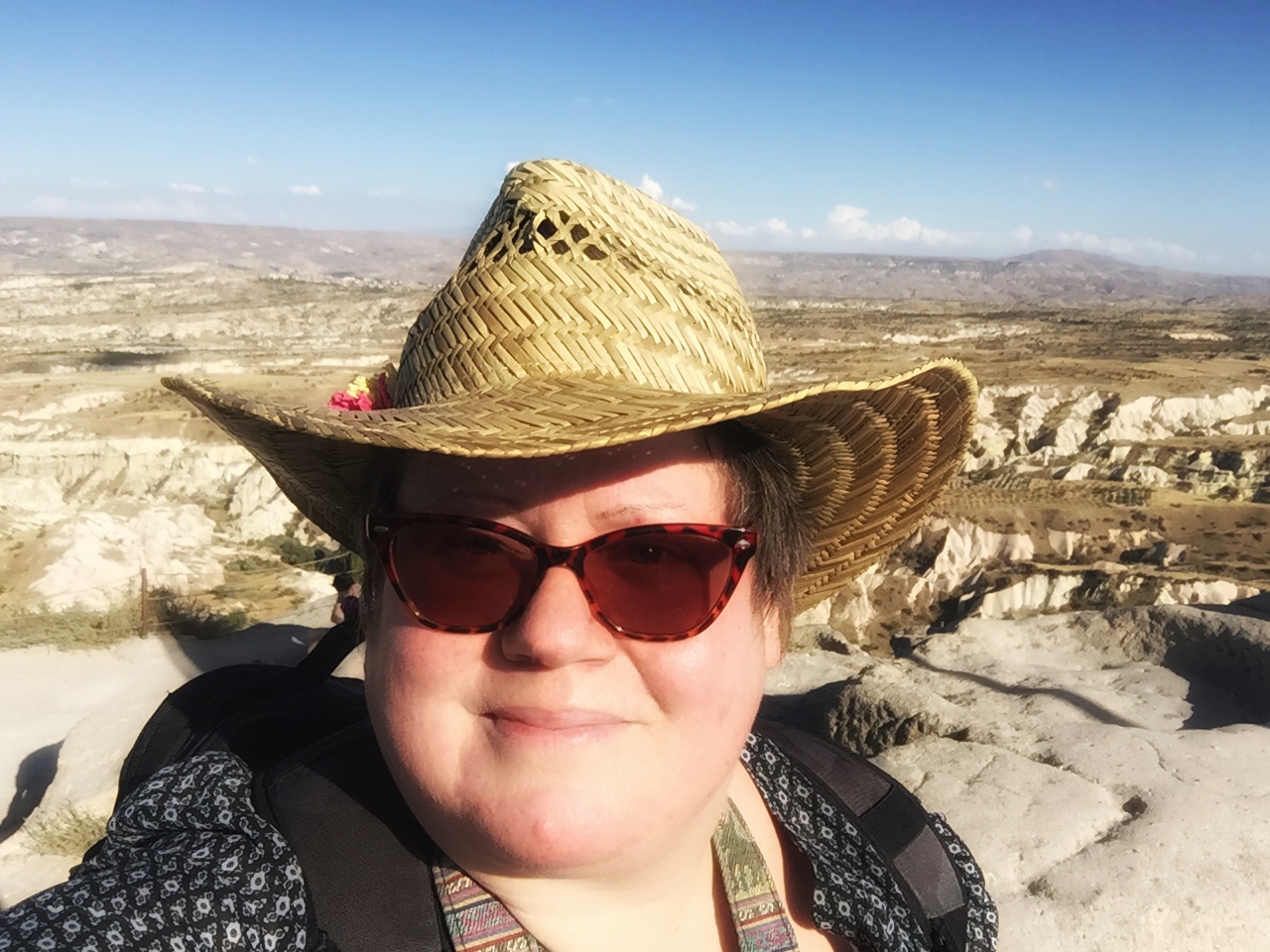 Despite all the injuries and pain and difficulties of my summer in Romania, where I went to physiotherapy twice weekly for seven weeks and at one point could barely even walk a block without sitting down, and couldn’t stand straight, I had the wherewithal to climb 280 steps up the citadel of Uchisar Castle in Cappadocia, Turkey, this past September. I got home in great pain, but this photo is of one proud woman.

aspirations changing your life goals living abroad new experiences New Year reflections
New Year Reflections from A Nomad in Sicily2019-01-012019-01-01//www.fullnomad.com/wp-content/uploads/2016/04/logo2.pngFullNomadhttps://fullnomad.com/wp-content/uploads/2019/01/snapseed-90.jpg200px200px
About
Steffani Cameron
I'm a journalist born and raised in Vancouver, Canada. Trapped in a life others kept selling as "the dream," I decided my dream was decidedly different. I sold all the stuff I'd worked so hard to acquire, and at the age of 42 I set off searching for something else—culture, food, adventure, far off lands. In short, I sought the whole world. 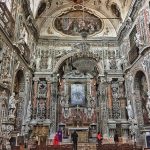 Another Christmas Abroad for the NomadStories and Thoughts