The In-Between Phase: What I’ll Do Differently

I’ve sold everything to travel 5 years. I’m back in Vancouver as the sixth month ticks past. Mexico is next on my horizon. For now, it’s about catching my breath while seeing family and dealing with personal business. I wrote this yesterday BEFORE my first speech in 4 years, but edited it today. I’m slowly feeling differently than what I’ve written here, but it’s important that I record some of these mindsets as they pass, because it’s all part of the Nomad Experience, and I’m trying to share the whole jumbled world that is nomad life, not just the shiny beautiful parts. And follow my day-to-day on Facebook if you’re not already.

There are arguably three seasons in Vancouver. Spring, Summer, and Rain. I’m in Rain right now. Days from now, sun will emerge, and I’ll get a taste of Vancouver flashing its “I’m so pretty!” poses. That’s the Vancouver that can almost, but not really, justify commanding nearly $2 million for its average house.

Days of rain. That’s what I’ve traveled home in time for. Rain, rain, rain. In a way, I’m grateful. Rain is to Vancouverites what Kryptonite is to Superman. Everyone crumples in fatigue and goes into hiding. This way, I’m just another who’s disappeared into a rainy-day hidey-hole.

I think there’s been a handful of times I’ve been this fatigued in my life. After loved ones died, during mono or pneumonia, and now after 5 months travelling. A friend of mine travels nearly 24/7 too. She stopped off at her parents’ home and slept for nearly four weeks, she said, before she could face coming back to Vancouver to visit friends.

That’s what I’ll have to do before I come back home next time. Go somewhere for 4-6 weeks and have a “lying low” phase, THEN come home. Restored, rested. Actually wanting to be around humans. Already, I know I’ll have regrets about not seeing more people once I’m on the road again, but at the same time, I’m doing what I need to do. I don’t want to get sick or injured from lack of rest, and I also want to have a reckoning with my hometown. Here’s where I came of age, and now I’m coming into a different age, and I need reflection.

Walking in the Azores, I pondered how amazing my life was some days, then I came across this graffiti and thought, “That’s what I’m doing.” And yeah, I’m having some second thoughts about the ways I travelled, but I also know I’ll never forget it.

Travel Talking: A Year of Milestones

Speaking of milestones, last night I had one –  my first public speech since a total bomb in 2011. I have dreams of speaking more later this year, in bigger venues, and it starts with stuff like this.

I spoke about what I’ve done so far, where I went wrong my first few months of nomad life, and how I’m changing the game down the line.

I can’t say anywhere I’ve been was a mistake or letdown. That’s all on me, the mistakes and letdowns.

Everyone I’ve talked to about this thinks I’m being hard on myself. Let’s just put that to rest, right now. I’m not being hard on myself. I’m being honest. There are things I did for the wrong reasons, plans that were poorly executed, improper research, all of which met in a demented confluence of stress and worry. That ain’t no way to live my dream.

Aside from that? I sold everything! I’m travelling the world! My big disappointments happened in places like Lisbon, Madrid, Porto, Zagreb, the Azores, and all kinds of amazing other locations that even now blow my mind. As far as “failing” goes, I’m failing crazy style! More, please.

I have no disappointment in myself. I do not feel that I myself am a failure. None of that. I’m living my dream. It boggles my mind. I just need to fine-tune my lifestyle approach. There’s nothing wrong with standing back to say “Well, okay, but let’s do all of that… but do it BETTER now.”

How did I go wrong? What mistakes were made?

I chose nomad life to be flexible, to bend like a willow, and to learn how to get past all the obstacles I’d put in my way all my life. Then I executed my first 5 months of nomad life in a way where I had zero flexibility. I put obstacles in my way again and locked myself into a costly way of life without an exit strategy.

Long before I left, I knew I would be at the mercy of the money markets, but for some insane “it won’t happen to me” reason, I prebooked four months of lodgings in Europe, none of which was refundable, then I got dinged by a currency that plummeted from a value of $1.40 CAD to $1.59 per euro, a big drop from when I booked my plans at $1.35 Canadian per euro. That alone added about $800+ to my months in Europe.

Where else did I go wrong? The big mistake? Renting private rooms, not apartments. I don’t like cooking in other people’s kitchens, so I gravitate to eating out too much, and the result of that is I find myself gaining weight and going broke at the same time. That was probably anther $500/month extra I was blowing due to being unable to cook. Next time, no private room, just whole lodgings. In Mexico, the rent where I’ll be is dirt cheap, and I’ll have a kitchen to myself too. 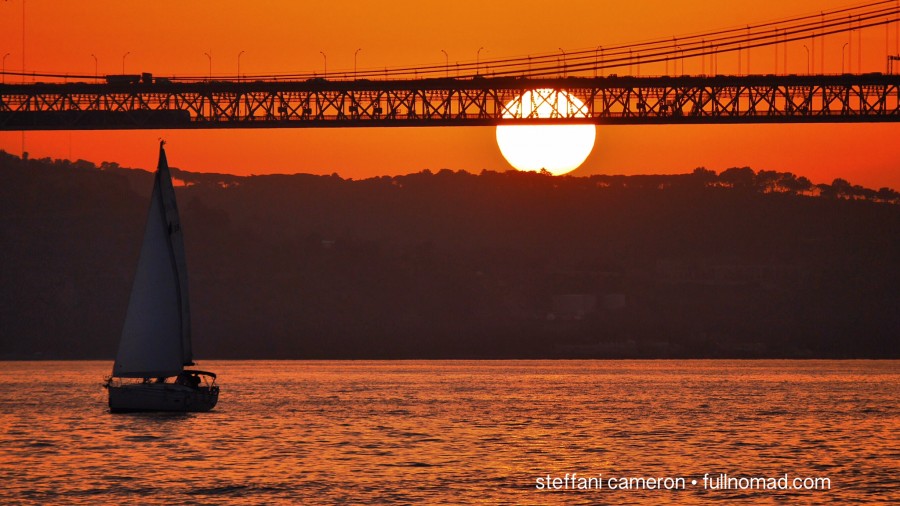 My last sunset in Lisbon. Here in Vancouver, it was cloudy and windy and threatening to storm this evening. One of my big regrets was in only spending a week in Lisbon.

Part Two: Figuring It Out

By heading to Mexico, I’m taking care of one of my biggest problems: Risk. I’ve taken on too much risk with too few income sources. Pursuing freelance and diversifying my money is what I need to focus on in coming months. Along that vein, I’ll be making my website much more readable, searchable, and a bastion of commerce, all which will serve me better in the future and lay the foundation for “passive income,” the elusive thing of beauty all self-employeds dream of.

Taking my time to get a grip on my self-employment and freelance streams in central Mexico is how I invest in my future. I’ll be still, stay in one spot for three or so months, and go into Mogul Steff mode as I conclude projects that have weighed heavily for months. They’re all things that won’t bring in much income now but could bankroll my travels in a year or two. Worth my time, yes?

Despite the bad start, gone is my stress of the lost income from adapting to travel, plus the losing of one of my prime sources of client bucks around Christmas. I took a real beating over the winter, but I’m emerging from that abyss and I’ve learned smarter ways as a result.

Now I know: If I had left my plans more flexible, I could have got a flight to Anywhere But Here and lived frugally in SE Asia or Mexico or Morocco, but I locked myself in and had too much to lose to try and save money by abdicating from my Eurozone plans. With further poor planning, I started staying in places for shorter times and travelling more, both easy ways to lose money. In the end, I probably overspent by $2,000-3,000 in my first few months, thanks to unnecessary expenses and complex travel scenarios. Worse, I likely could have saved $1,000 – 2,000, or more, had I’d said “Screw the Euro, bring on the peso!” or such, and improvised when I had that initial bad feeling about where things were going.

Like I said, those “failures” happened in Lisbon, Madrid, Edinburgh, the Azores, Manchester, and beyond. Can’t say that sucked too much. Just paid too much, is all.

El Plan Sencillo* – In Which I Do Better

So, on April 5th, I leave for Mexico. Oaxaca. (Wha-ha-ca.) I’ll sublease a 2-bedroom apartment with no obligations, no downpayment, no fixed term, with the potential to stay until summer. I will pay the lowest rent I’ve had yet, nearly 43% less. I’ll have a kitchen and be close to public food markets. It’ll be sunny every day, hot, lively, full of amazing food, colour, and culture. I hope to cut expenses by about $3,000 in 3 months, plus increase income by losing fewer days to travel and adjustments and planning demands. In all, I expect to recoup potentially $5,000 off my excessive European lifestyle in three months(ish).

While my finances catch up, my writing will be caught up on too, by way of finishing my Europe tales in e-book form, loaded with my photography too. I’ll get my new fancified blog up and running, including my e-Store, where you can order hand-written postcards from me, buy my photos, my e-books, and more. Furthermore, I’ll focus on the next chapter of my life and all its complexities with things like pursuing more freelance, learning Spanish, getting cooking lessons, and trying to absorb one culture in one place for a few months.

It’ll rest me up in advance of doing “The Banana Pancake Trail” as I travel through Southeast Asia next winter.

That’s how I define “do it better.”

In between my many “errors,” I found time to be the only human except a security guard in a 2,000-year-old Roman coliseum. To say I’ve had incredible experiences is an understatement.

I can’t tell you how optimistic I am about my future. With no clue what lies next, what amazing experiences are to come, I keep thinking “If that’s how ‘bad’ it was when I was stressed out and penny-pinching, bring on the ‘good’ times!”

On those days when everything’s in sync and I’m in a foreign place, caught up in some other culture’s magic, there’s nothing better. There are no doubts, no fears, no “what if” scenarios. There’s that moment, that bliss, and nothing else. I used to love magic shows as a kid but now I find my magic in travel.

I’m 1 day shy of 180 days of “homelessness” (or being “home free”) and have no regrets. Tired, yes, a bit overspent, yes, stressed about All The Things To Do, yes, but questioning myself? Ha. No. Not in the least.

Well, maybe I regret not taking a time-out before I returned to Vancouver. It’d sure be nice to feel a bit keener to see everyone. But hey. I’ll just do that better next time. Right? 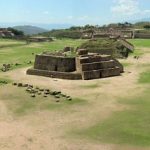 In Search of Stillness: The Oaxacan Chapter LoomsMexico