This was written last Saturday and I’m now 10 days into Taghazout. I got sick and posting this got delayed. But… hi!

After a week in Taghazout, let me tell you, “it’s complicated.”

First, my awesome news: I’m in the Washington Post! I’m a big kid now! Some serious happy-dancing happened there. Read my column here, if you missed it.

But Taghazout – I love it. But my body’s not sure about this place.

Today, I’ve not stopped coughing. The fog here – battered by wind so it doesn’t settle in, but the fog is “there,” just not visible  – has gotten deep in my chest. My leg wound continues to be infected but appears to be improving. I’ve had mild food poisoning, vertigo, and even weather migraines. It’s been 8 days! (Note: I got full-on sick the next day. Still sick 3 days later.) 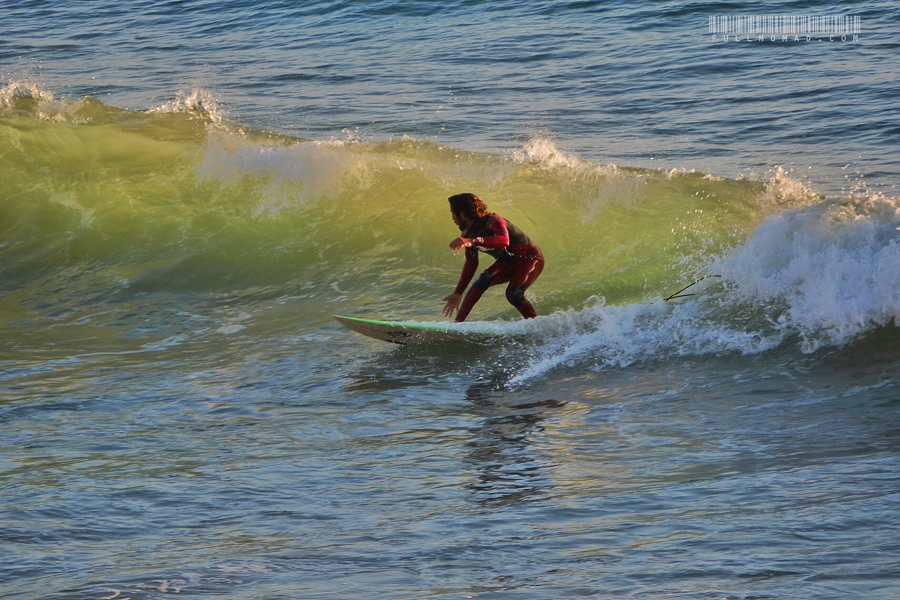 One of the rare guys who’s really, really good in town. He literally caught every wave he chased, and rode at least 7 to anyone else’s 1 wave.

All of this is testimony to the unique climate they experience in Taghazout. Close to the north-western tip of Africa, it’s taking the brunt off the Atlantic. There’s a wall of mountains behind us too, creating crazy climate where weather forecasts are always wrong, and situations change quickly.

This is the wild-card of travel life. Climate can do a number on you. Fluctuations in heat, cold, dry, wet, pressure – all of it can wreak havoc when you’re constantly in flux. Acne breakouts, sudden dry spots on skin, irritations, and much more result from excess travel. It’s smart to remain within a similarly-suited climate region for an extended period. This prevents your body getting subjected to huge climate swings, because that’s what messes things up.

I went from “absolutely horrible” weather for Greece to a cold, wet day in Morocco, followed by three hot days, then a ridiculously raining night. That burned off to a super-hot afternoon, followed by this fog battling with wind and failing to take hold. It’s a week of weather turbulence unlike any I’ve experienced so far in my travels. 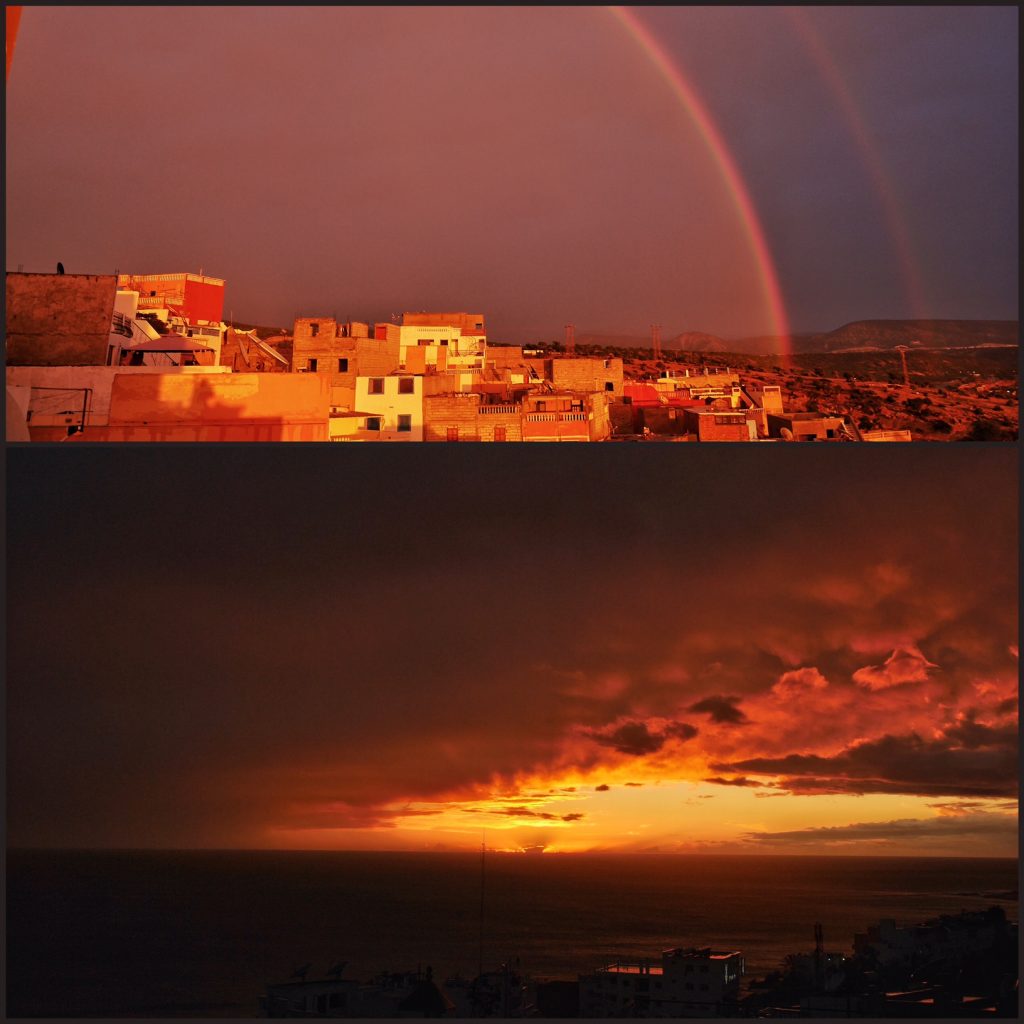 This was the weather yesterday. Incredible sunset with skies only JUST parting after a torrential rain, and a double rainbow opposite. Yes, it really was this red/gold. It was just… wow.

The breakfasts at my lodgings here at Sun Desk are terrific. There are three basic days. “Moroccan quiche,” “eggplant hash,” and granola. With these comes awesome local bread… You gotta remember, Morocco benefits from proximity to Europe plus a short stint as a French colony, so there’s this amazing fresh white bread they pick up every morning at the bakery. Then there’s cheese, fruit salad, “real” peanut butter, two jams, coffee, tea, olives, and so on. It’s a huge spread.

On eggplant hash days, there are boiled eggs too. Let me tell you about the eggplant hash: I have maligned eggplant all my life. Eggplant doesn’t suck. Most people’s cooking of eggplant sucks. Moroccans, though, have got it going on. Packed with peppers, onions, turmeric and other savory delights, this stuff is shockingly good.

That’s without even getting out of pajamas. We eat on the roof daily, squinting in the African sun, the waft of salty water hitting us. It’s a glorious way to greet a day.

Then there are the restaurants, where tagines are available everywhere. A tagine is a baking dish with a conical top designed to self-baste food. This allowed the primarily-desert-dwelling Moroccans to cook with a minimum of water. It’s pretty genius. My favourite so far is kefta and eggs. Kefta is a spicy meatball in a tomato-y, spicy sauce kicked up with what I’m sure is harissa, Morocco’s answer to curry paste. Eggs are cooked on top. It comes with plenty of bread to sop up the sauce. Yum! 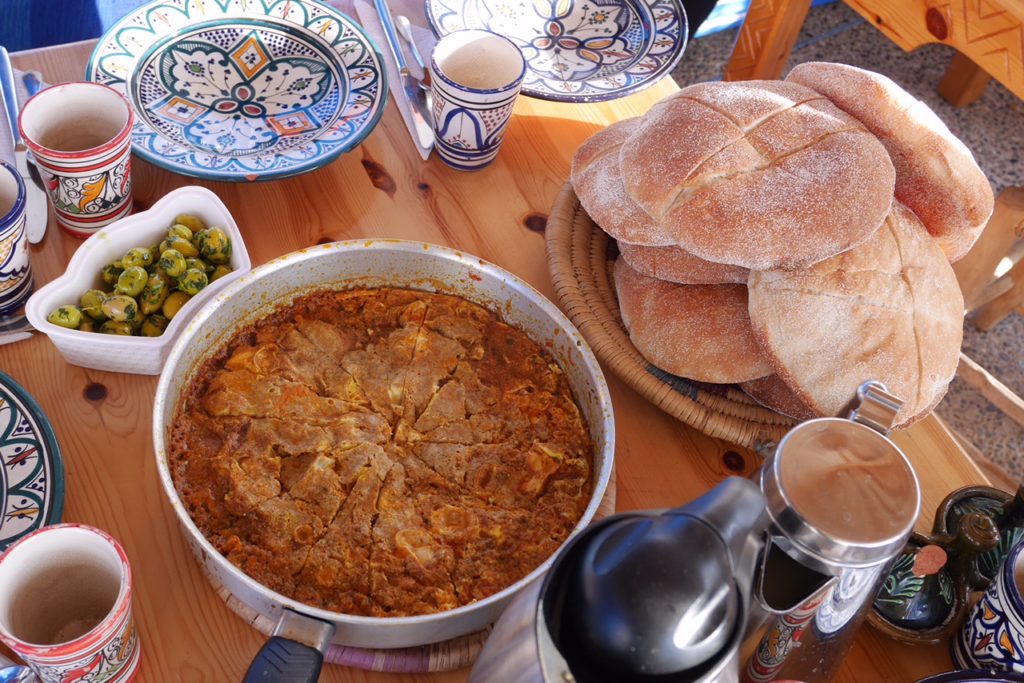 Moroccan omelette/quiche/tortilla. It’s eggs with a spicy Morrocan curry-like kick to it, with the wonderful bread. We get this 3x per week. 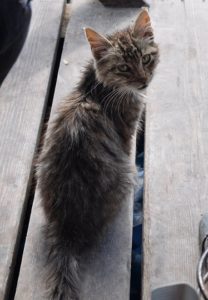 For a town of 5,000, it’s incredible how many feral dogs and cats there are. They’re everywhere. Most of the time it’s adorable or funny, but it’s also brutally violent and tragic.

Today I saw a young cat, barely out of kitten stage, bloodied, blinded, and missing an ear. It broke my heart. Just last week I’d photographed the same kitten sitting under my table, looking adorable. Today, he looked near death. I fed him chicken and he couldn’t find it at first, then finally sniffed it out. I wished I could do something about it, but the reality is there’s no veterinarian in this town, no one is likely to take care of the cat after I’m gone, and it’s unlikely to survive here anyhow. But while I was wondering what I could / should do, he snuck off and I didn’t see him again.

I suspect I won’t. Nature is as violent as it is beautiful.

It’s Not the Size of the Dog in the Fight…

While walking home, I noticed how many animals have got scars on them from fights of their own in the past. Big scars, telling scars. They are the lucky ones to live.

We get used to the idea of dogs and cats as house pets, because we’ve domesticated them for hundreds, thousands of years, but they’re still animals and they can get primal.

In a world like this, where so much is fought for, and so little excess is to be had, these animals live a difficult life.

That’s why, a place like Dar Josephine, a nice restaurant in town, is a fascinating place to visit. They have no fewer than four resident dogs and about 12 frequent-flyer cats, all of whom wander freely in the restaurant no matter what time of day it is. I’ve learned to buy the 1.5L of water and to keep my glass full for cats who are so brazen they’ll jump on your table to steal your food. They get a glass of water from me… in the face! Doesn’t hurt them, but keeps them at bay. I toss the bones to them when I’m through. 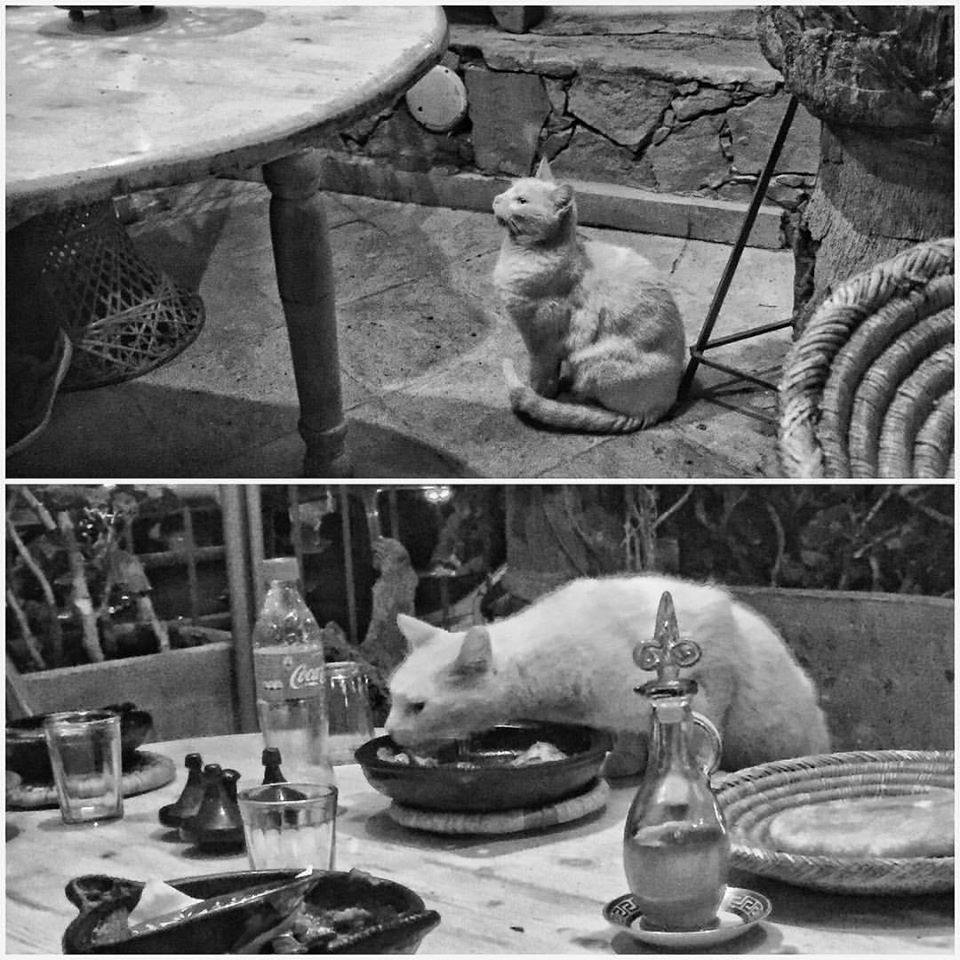 More happy are the strays from Josephine’s, where they are allowed to feast on bones and scraps before the servers come, but it doesn’t stop them begging for food during meals, though.

Surfing culture here in Morocco extends back decades. People like Jimi Hendrix, Janis Joplin, Rolling Stones, Jefferson Airplane, Grateful Dead, and so many other genre-bending musicians from the ‘60s and ‘70s all visited Essaouira, just 100 kilometres north of here. Counter-culture has thrived here for a half-century. If you think it’s just in the white folk, you got another think comin’.

Moroccan men from 20 to 50, and some women too, are frequently big on the surf scene. There’s a great deal of hashish in the region too. They may not be drinking due to the Islamic law – and this is, in fact, a dry town – but you’ll spot bloodshot eyes of hash-smoking from time to time.

And surfing is ground-zero of the alternative lifestyle here. They’re still practicing Muslims, but they’re relaxed, passionate about nature and waves, and love where they are. They’re proud of this town, this coast, and their lifestyle.

Between the roar of the waves, dogs barking, cocks crowing, and scooters roaring, the muezzin’s adhan plays over the town five times daily. On Friday afternoons, an entire Islamic worship is broadcast over the town’s speakers in Arabic.

Here, everyone lives in peace. From Western surfers to old Berbers and Sufi mystics, there are no confrontations or clashes. Everyone respects each other’s lifestyle. It’s a dry town, but you can buy alcohol two cities over. Even still, I never see Western surfers drinking at all. It’s amazing – go where there’s no alcohol and it’s strangely easy to simply not drink. I haven’t craved wine once since I got here. Wednesday, we’ll go two towns over for the market, but I’ll bet you I won’t buy wine, even if I see it. (And I didn’t. Still not craving any.) 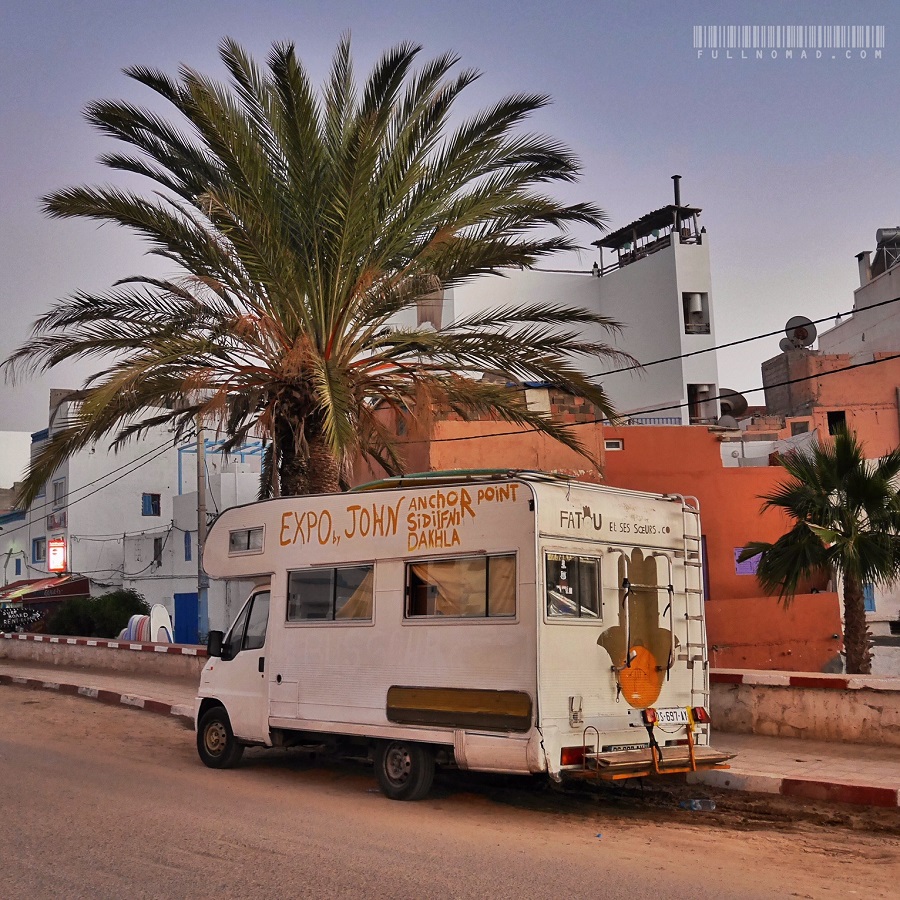 Here’s the counter-culture for ya. Surf-or-die types who’ll go up and down the coast in chase of the next great wave.

Magda, the woman who owns this co-working/co-living “hotel,” told us how much the Islamic culture here is dictated by “Insha’Allah.”

So, “Insha’Allah” basically means “if God wills it.” There’s the principle of “maktub,” which is that “it is written.”

No matter what you aspire to, work for, dream of, you will only achieve it or do it if maktub and Insha’Allah. If it is written, and if God is willing.

Ask a taxi driver if he can take you to the market – “Insha’Allah.” It’s essentially, “I hope so, but God may have other plans.”

Magda spoke to one of the cleaning women here, the one I have fallen madly in love with and who acts like “mother” to everyone here, Zahra, the loveliest lady ever. Magda says to Zahra, “Can you come in at 7am? It’s a really busy day tomorrow…”

Magda rolls her eyes because she knows it’s unlikely that she’ll be seeing Zahra at 7am, because if anything at all happens to delay Zahra’s arrival, then maktub — it was written to be so, and God willed the delay.

I can see myself saying that to my writing clients about getting my work in late. “Maktub.” It was written, fate intervened, you have it now and it is good, Insha’Allah. 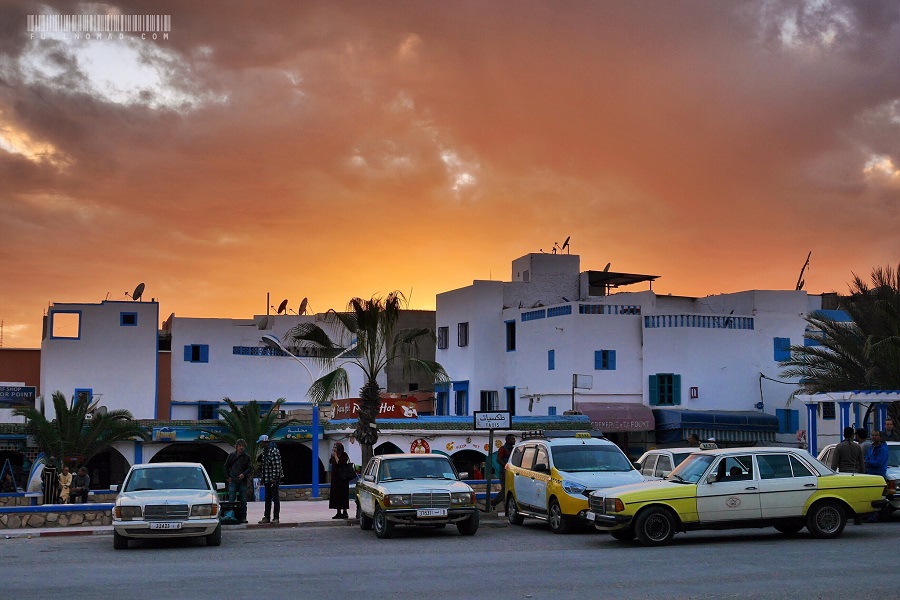 Sundown over the Taghazout town square, where soccer gets played nightly.

The embattled fog’s chill is deep in my bones. Far down and away in town, I see the throng of boys playing soccer in the town square as they do every night. It’s Saturday night here, their Sunday, and 10:20, but the game has at least 30 boys of all ages on the plaza, playing under street lights. Now and then a raucous cheer rises, but I never know who’s scored.

And there, behind it all, is the ever-present roar of surf-filled coast stretching north and south of me.

I’m sure my body will acclimatize to this climate. And even if it doesn’t, it’s a small price to pay for being in such a unique, crazy little town with a vibe unlike any I’ve ever experienced before.

This is a whole other world, a mysterious culture that stretches back millennia, and a strange hybrid of locals and foreigners who all get along so well. It’s a conundrum and a puzzle, but I’m constantly amused and in love with what it offers and the friendliness within.

I’m thrilled my Moroccan experience began in a quiet town of 5,000 here in Taghazout. I can’t imagine how overwhelming and jarring it would be to thrust myself into a large city with no one to help me navigate it all.

And so there is much more to learn about Morocco and 19 days left to do so. Learn, I will… insha’Allah.

coliving coworking eating in morocco feral cats insha'allah kefta maktub moroccan food surfing Taghazout
Moroccan Dispatches v2.0: A Week in Taghazout2017-02-012017-02-01//www.fullnomad.com/wp-content/uploads/2016/04/logo2.pngFullNomadhttp://fullnomad.com/wp-content/uploads/2017/02/header.jpg200px200px
About
Steffani Cameron
I'm a journalist born and raised in Vancouver, Canada. Trapped in a life others kept selling as "the dream," I decided my dream was decidedly different. I sold all the stuff I'd worked so hard to acquire, and at the age of 42 I set off searching for something else—culture, food, adventure, far off lands. In short, I sought the whole world.
Showing 5 comments 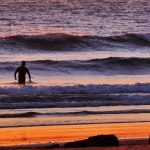 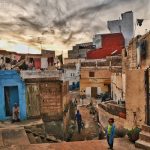