The Gift of Dreaming New Dreams

Sleep has become interesting in recent weeks and months. It isn’t every day, but often I’ll “pick a place” when I drift off. Some country or region I think I have a clue about, and then I fall into a slumber imagining a day or a life in said place. 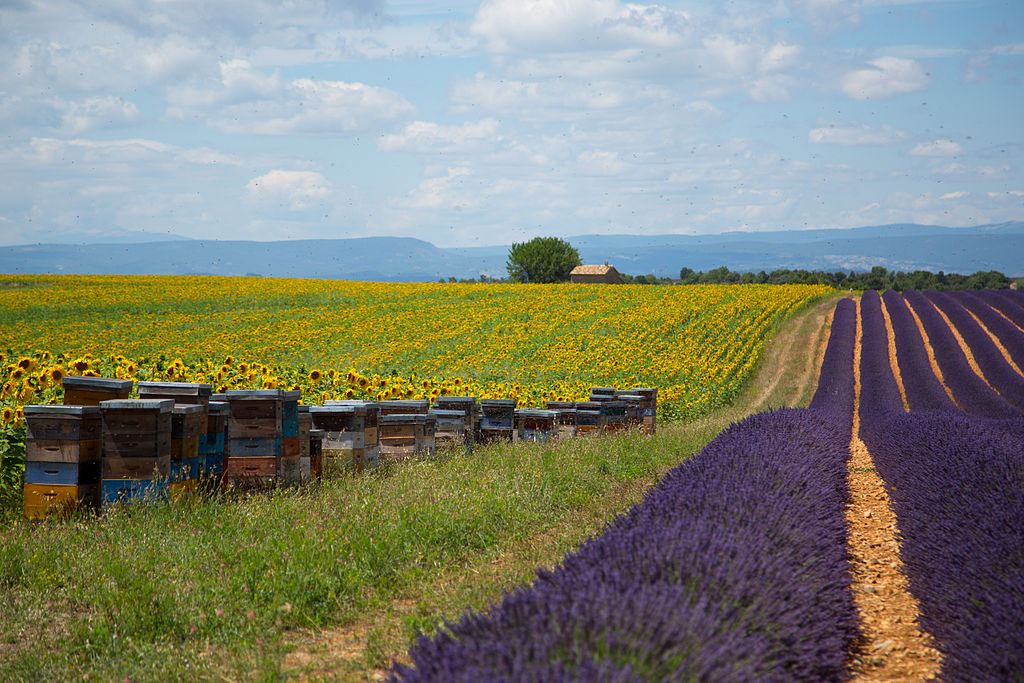 Sweet Dreams Are Made of This

Like wandering the slopes of Sicily as scenes of the Godfather play in my mind and hundreds of shepherd-led sheep bleat in the distance, while brutal heat radiates off the stones and ground around me.

Or cycling on a spring morning up a sandy shoulder of Breton street, the smell of dew-soaked lavender fields drying in the sun, thoughts of croissants and baguettes powering me pedal-by-pedal as I close in on town and bakeries, cycling in from my temporary home in a 150-year-old tiny cottage in the country.

Maybe I fall asleep dreaming I’ve connected with a group of Istrians who’ve invited me to grill local meats over a fire in the backyard as a brick oven will bake our bread. In my mind, laughter flows as easily as the wine while an early-autumn dusk falls over the rolling Croatian wine country.

Then again, I could be strolling through the streets of Malaga, Spain, with people I’ve met in a 200-year-old artist’s hotel I’m eyeing, as we quest for tapas and wine, crossing a heady and beautiful swirl of string lights and stone paths on our way through narrow twisting Old Town streets.

Or I could be sleeping in the 400-year-old loft in Tarifa I’ve already bookmarked, debating between a day of surfing lessons after maybe some potato bravas and eggs, or perhaps getting a change of scenery in favour of hopping a ferry to cross the sea to Morocco, to absorb the land of berbers and magic. 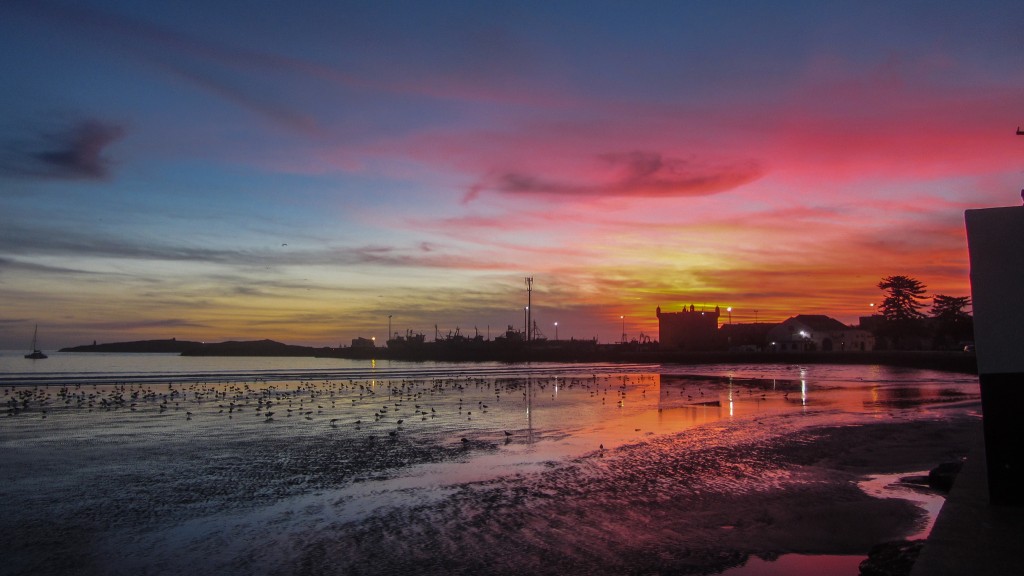 Sunset in Essaouira, Morocco, by AG Gilmore on Flickr

First This, Then That

Sometimes I fast-forward to year two, when I will be in South America. I imagine a small, traditional mountain town during Easter, remembering my Catholic heritage as locals struggle to haul a replica cross through town in honour of their saviour Jesus. Or it’s later in Spring and I’m enjoying Cinco de Mayo. Maybe it’s Halloween at home but I’m caught up in the insanity of the ceremonial Day of the Dead, dancing through cemeteries as shamans send up offerings on its outskirts.

Who knows. There’s so much I don’t know that my dreams are likely to be as wrong as they are fantastic, but that’s half the fun.

It’s a strange thing, being able to go to bed and dream of just about anything in the world and know a variation is likely to happen within five years. I can’t even fathom the things I’ll be checking off my bucketlist. 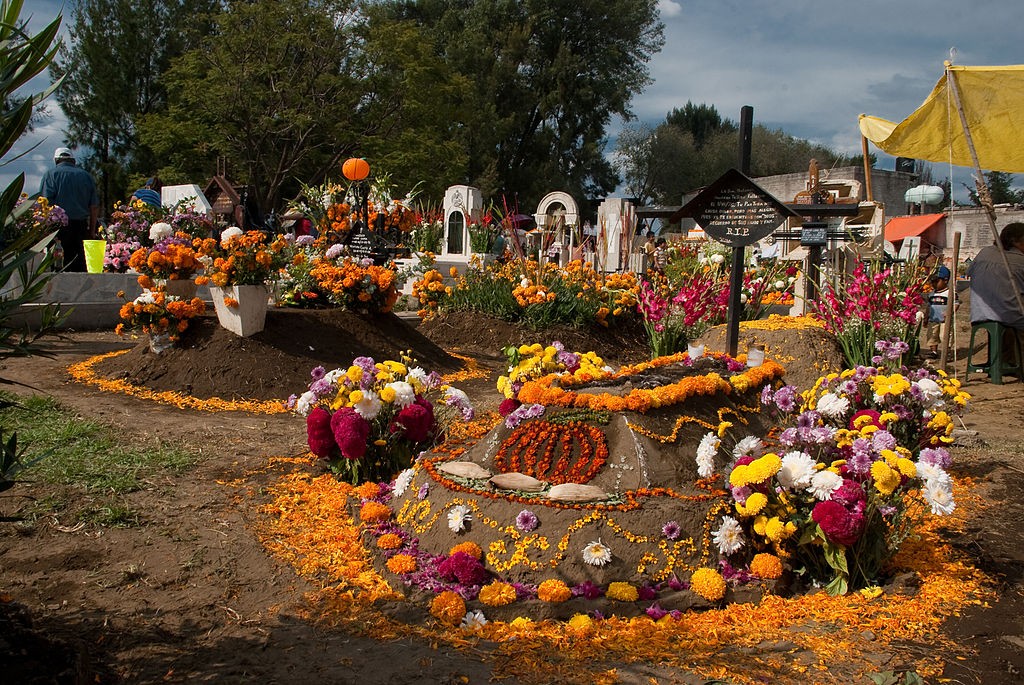 Day of the Dead in Tecomitl Cemetery, by Eneas de Troya (originally posted to Flickr as Panteón de Tecómitl)

As it stands today, the plan is to spend my 42nd birthday at home, then depart for Europe, where I’ll spend the majority of my first year abroad. On the list is Croatia, then Spain, Portugal, France, Italy, Georgia, Czech Republic, and Slovenia. There has even been talk of a Sound of Music tour of Austria with my gay best friend so we can twirl in the hills that are alive with music, while solving problems like Maria.

After that, it’ll be home for my 43rd birthday with friends and family, then a Canadian Thanksgiving, and then off to Mexico for Dia de Muertos (Day of the Dead) and the start of my second year of travels, featuring places like Ecuador, Colombia, Brazil, and Chile. 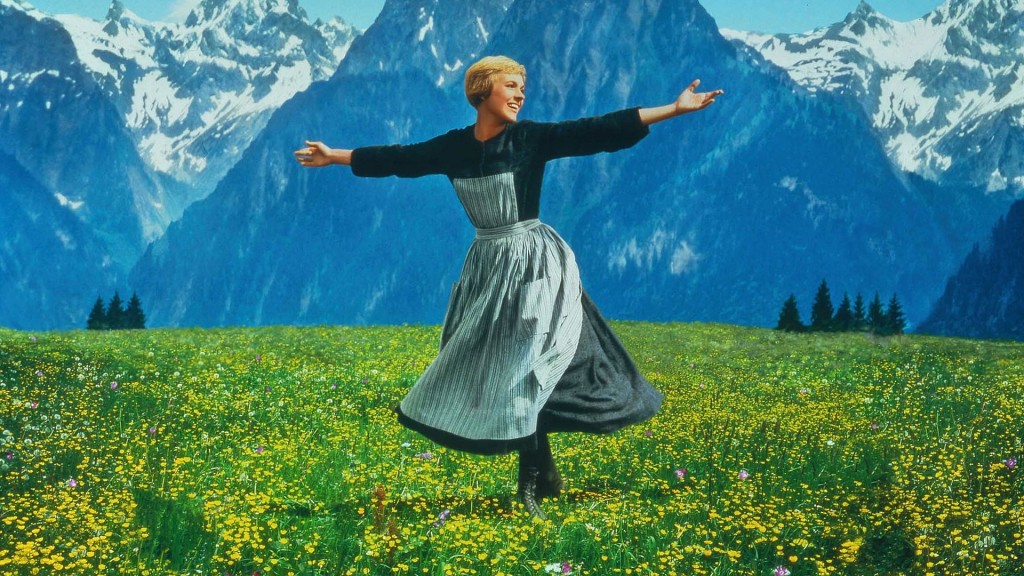 Solving problems like Maria. One day I too shall twirl in the hills that are alive with music.

I daydream well, too. This takes the edge off the fact that I don’t remember my night-time dreams and very rarely have. I drift off consciously thinking of adventures but seldom recall where they led me during my halcyon stupor.

But somehow that works for me, too. The less I can remember about what I might have dreamt, the less I’ll obsess about trying to make my realities match my dreams. It’s a freeing blank-canvas thing, that. No memories, no hang-ups, no expectations.

Just a big fat world of juicy opportunities, clashing cultures, and no limits. 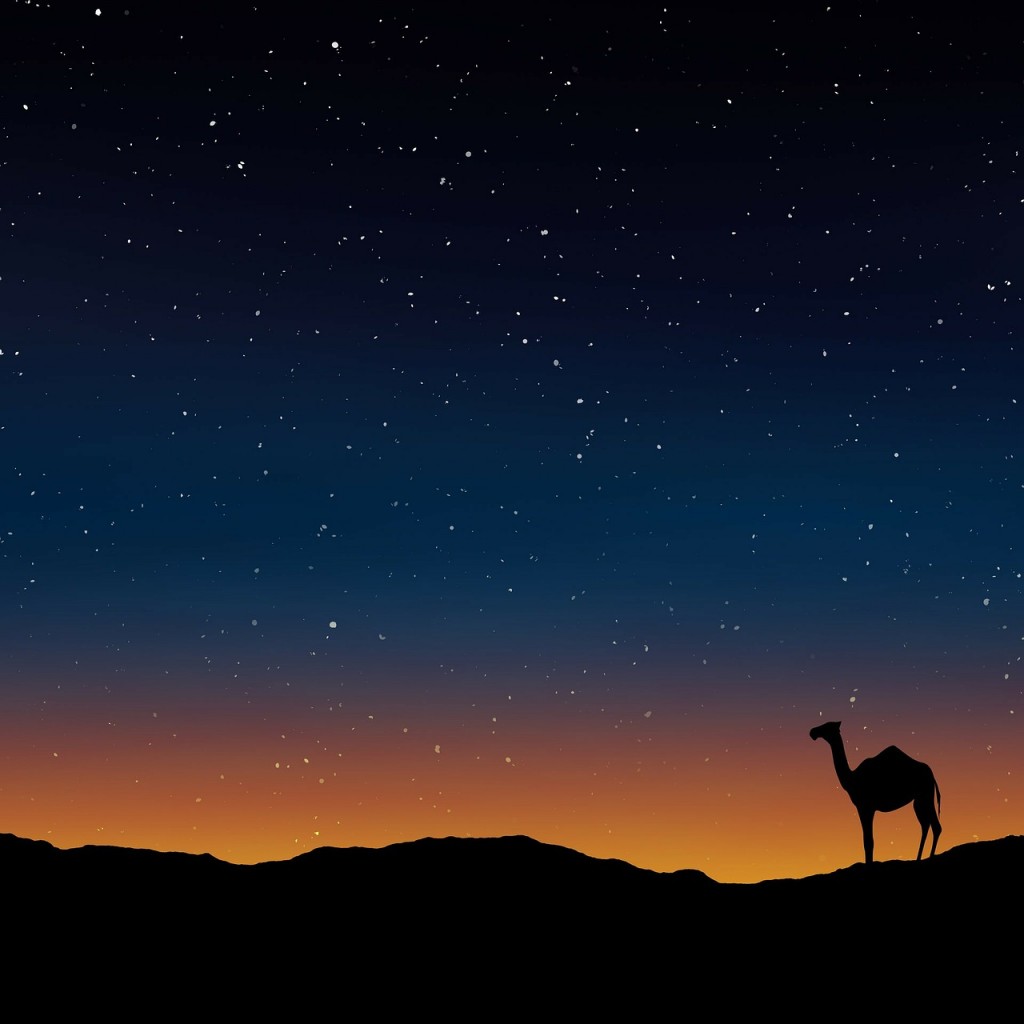 The Extravagance of Simple Living

I remember five years ago this week I become unemployed and would remain that way for the better part of a year. It was crushing. For the first months, I was terrified about my future. Somehow I found a way to enjoy life without money, just being in the moment. Once I was removed from the ultra-rich neighbourhood I’d worked in daily, I began to stop worrying about what I didn’t have, and instead realized all the great things that were around me. All I needed was a cheap lunch, a sunny day, and a world to explore.

Someone told me it’s the wealthy people who are the most scared of money. They’re terrified how they would adjust if suddenly all those comforts and complexities afforded by their lofty incomes vanished overnight. Poof. Slummin’ it. I can get that. It’s easy to get attached to wine every night, better ingredients, the freedom of seeing something you want and being able to buy it without blinking.

It’s when you don’t have a choice about being content with what you have that you’re most able to be content. Nature is free. The world is free. It’s doors that cost the money. Avoid doors, find the right spot, the right day, bring the right snack, and you might feel like you’re the richest person in the world, without even spending ten bucks. 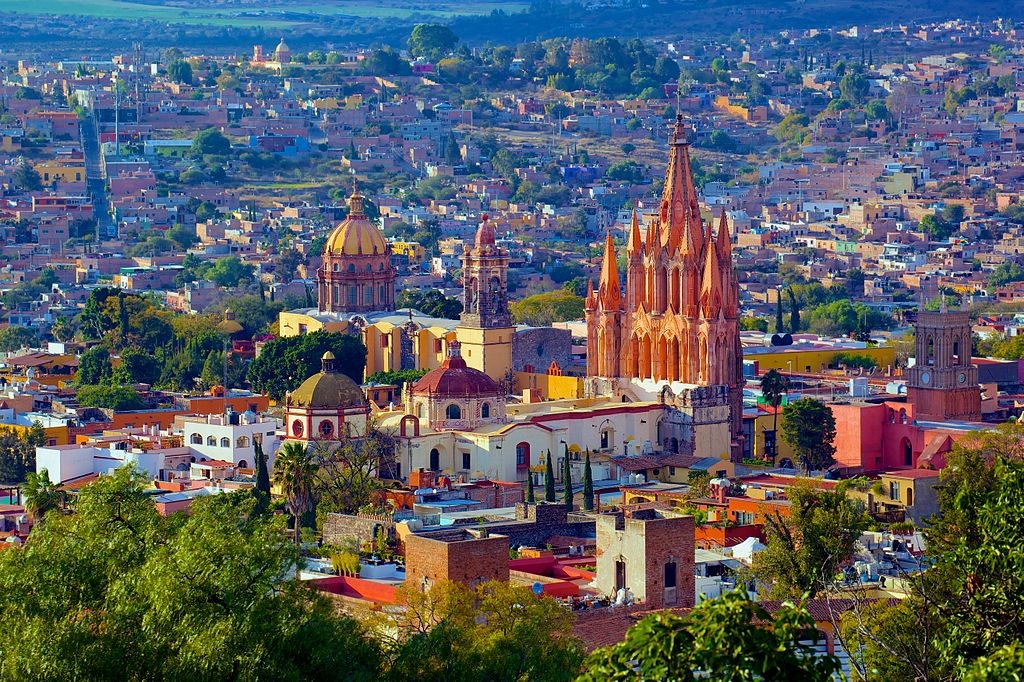 San Miguel De Allende, Mexico, where I want to spend a month or two in year 2. By http://www.flickr.com/photos/jiuguangw/

The Five Senses of Travel

When I dream of my life abroad, most moments that pop in my head are simple, easy, affordable. They’re inexpensive but sensual, in that I can smell or hear or feel the experience in my mind. Like the heat of the Sicilian sun and the way dusty roads cake my nostrils and dry my eyes. Or the smell of fresh-baked products wafting in the sunrise on crooked Old Town streets, and the strains of a 4-piece band playing on a corner in Prague late on a Saturday night, or the scratchy rigidity in leaning against the bark of a Portuguese cork oak in a meadow, taking a reading break on a bike ride to a winery.

You can keep your four-star restaurants and epic Museum tours. The journey I’m after, the dreams I have, are for a simpler, quieter life. Real people, real places, few distractions. Foods, wines, weather, vistas — things that have placated the traveller’s heart for millennia. 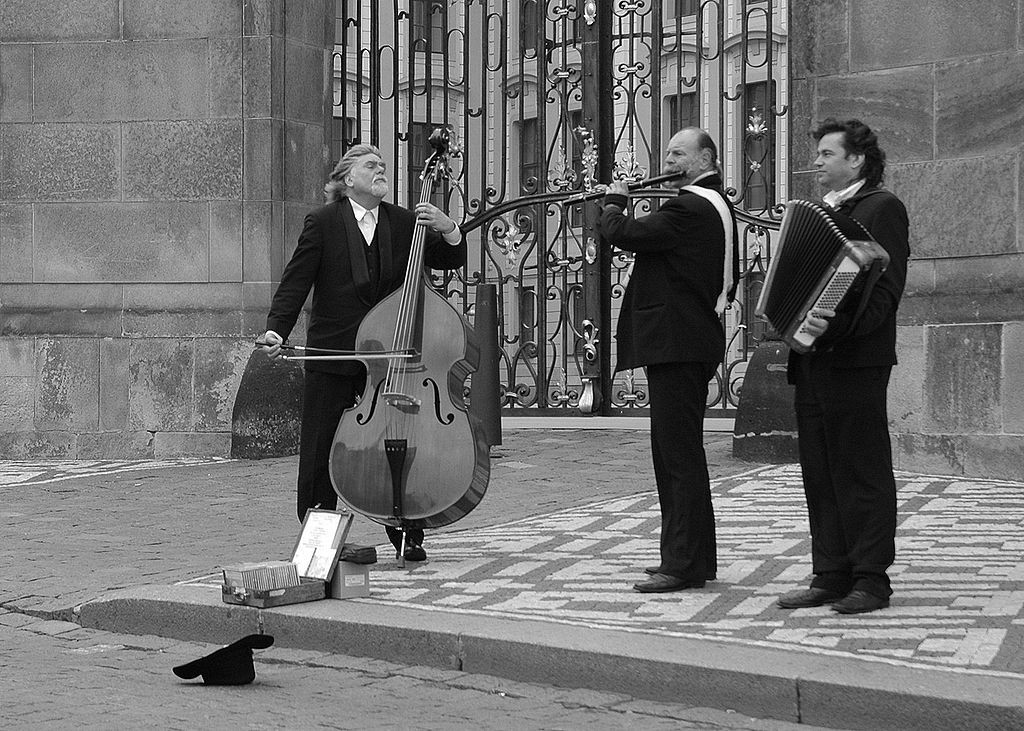 Of Senses and Cents, Then

My trip abroad might be an extreme bucketlist, but it’s also one of the most elaborate retirement-savings schemes ever concocted. After life gave me a decade of rehab and underemployment, I have no savings. This is my bizarre and creative way of changing that. To achieve savings while crossing basically EVERYTHING off my bucketlist means I might not afford all the expensive admissions for landmarks in Europe. Instead, I will find ways to have budget-friendly dream-conquering experiences. This is an exciting challenge.

So far, none of these budget-friendly dreams of mine have made me the least bit wistful. I’m not a fancy-pants type, never have been. I like peasant food, I like simple people, I love honesty and openness. I’m not a classist, but I don’t belong in the ritzy places, and that’s just fine with me.

Simply put, mine are blue-collar foodie dreams for a European life filled with great food, mostly sunny days, Old Towns, friendly strangers, bike paths, and rustic day trips. When I lay me down to sleep, I dream of rediscovering a love of reading, writing and photographing every day, eating incredible food, and seldom seeing the same sunset in the same place twice.

I can tell you that the five minutes before I fall asleep are often intimidating in their potential. What can’t I dream about? Not much. What a dramatic departure the rest of my life will be. 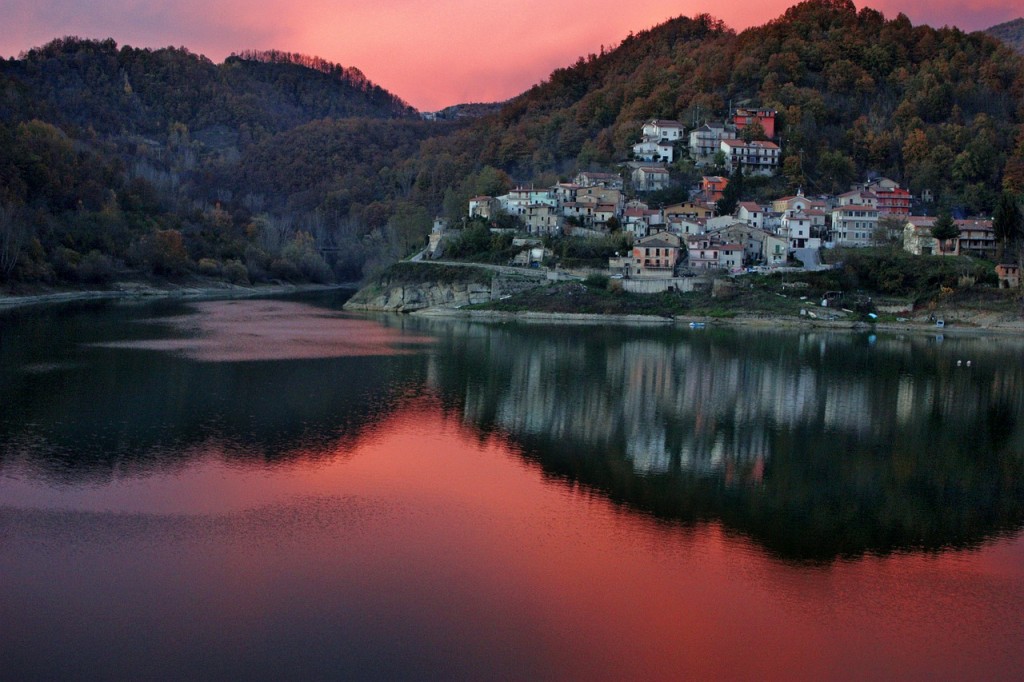 blank canvas bucket list adventures dreaming dreaming of trips abroad dreams of travelling living your dreams places to see planning travel where to go
The Gift of Dreaming New Dreams2015-03-072015-03-07//www.fullnomad.com/wp-content/uploads/2016/04/logo2.pngFullNomad//www.fullnomad.com/wp-content/uploads/2016/04/logo2.png200px200px
About
Steffani Cameron
In 2015, I sold everything to travel for five years. I'm living out of a duffle bag and works wherever I can get some Wifi. A trained journalist and avid photographer, I'm passionate about culture and what makes us tick. Click below to contact me for projects and opportunities.